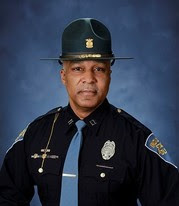 INDIANA – The Superintendent of the Indiana State Police, Douglas G. Carter recently recognized Captain Ruben D. Marte’ for achieving 30 years of service to the Department and to the citizens of Indiana.

Captain Marte’, who is originally from the Bronx, New York, is a 1982 graduate of DeWitt Clinton High School, and in 1986, he earned his Bachelor’s Degree in Business Administration from Baruch College, New York City, New York.  On December 9, 1990, he graduated from the 48th Indiana State Police Recruit Academy and was appointed as a Trooper and assigned to the Indiana State Police Post in Seymour, where he served for two years.

In 1992, Marte’ was transferred to the Indiana State Police Post in Bloomington. In 1997, he was promoted to the rank of Sergeant and was transferred to the Criminal Intelligence Section.  Marte’ was recognized for his outstanding service to the Section and quickly rose through the ranks and ultimately, in 2003, was promoted to the rank of Lieutenant and served as the Commander of the Criminal Intelligence Section and the Special Investigations Section.