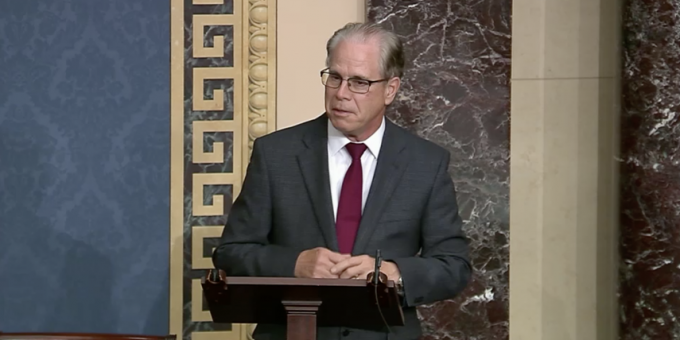 WASHINGTON – Senator Mike Braun, Senator Steve Daines, and Senator James Lankford’s amendment to the Endless Frontier Act that would make it a crime to engage in chimera research, or the creation of animal-human hybrid organisms, received a vote on the Senate floor tonight.

Rep. Chris Smith of New Jersey introduced the original legislation in the U.S. House of Representatives.

A chimera is an organism that contains cells from two distinct species, such as an animal-human hybrid created in a laboratory setting. In recent years, research programs involving chimeric organisms have become more prevalent.

“Human life is distinct and sacred, and research that creates an animal-human hybrid or transfers a human embryo into an animal womb or vice versa should be completely prohibited, and engaging in such unethical experiments should be a crime,” said Senator Braun.

“We shouldn’t need to clarify in law that creating animal-human hybrids or ‘chimeras’ is ethically unthinkable, but sadly the need for that very clear distinction has arrived,” said Senator Lankford. “Currently the National Institutes of Health does not do this research, and we need to keep it that way. Researchers who are attempting these horrific once-science-fiction experiments should focus on valuing the dignity of human life, not trying to genetically merge and manipulate humans and animals. I’m glad to stand against this unethical practice with Senators Braun and Daines.”

“In trying to compete with China, we shouldn’t become like them. It’s critical that we draw a bright line against unethical forms of research that fail to recognize the distinct value of humans over animals,” said Senator Daines.

While the National Institute of Health (NIH) does not currently fund this research directly, chimera research programs continue in local universities as exhibited by last year’s creation of a mouse embryo with 4% human cells.

In 2016, the NIH considered lifting their moratorium on experimentation involving human stem cells in animal embryos. Though the NIH has not to date lifted that moratorium, chimeric research has continued to advance in private research settings with alarming results.

In April of this year, researchers at the Salk Institute in California created a human-monkey chimeric embryo by injecting human stem cells into embryos from long-tailed macaques. The human cells survived within the monkey embryo and generated additional cells; the researchers noted that all 132 macaque embryos injected with human cells still contained human cells seven days after fertilization.

Acting on the significant ethical concerns and ramifications such animal-human hybrid research has for the sanctity of human life, the senators introduced an amendment to the Endless Frontiers Act which would make it a crime for any person to knowingly 1) create or attempt to create a prohibited human-animal chimera; 2) transfer or attempt to transfer a human embryo into a nonhuman womb; 3) transfer or attempt to transfer a non-human embryo into a human womb; 4) transport or receive for any purpose a prohibited human-animal chimera.

This amendment is endorsed by the following groups: