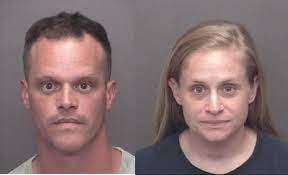 UNDATED – An Odon couple was arrested on a charge of criminal trespassing after two incidents.

Daviess County Sheriff’s Department reported the two had been at the Daviess County Airport demanding someone to fly them to Key West, Florida.

At one point, Jonathon went onto the tarmac and jumped on a moving plane.

When Vanderburgh County deputies arrived at Tri-State Aero, the Millers were parking their vehicle. Officers said the couple had been previously banned from the airport.

Besides the Millers, their three children and three other people were in their van.

Jonathon told the officers he had just met the three people and invited them on their family vacation.

Jonathon then admitted to police that he and Lauren had smoked drugs the day before.

Both were arrested. Their children were released to the care of a relative.

Both have since posted bond and have been released. Both appeared for their initial hearings in Vanderburgh Superior Court 3 on Wednesday.