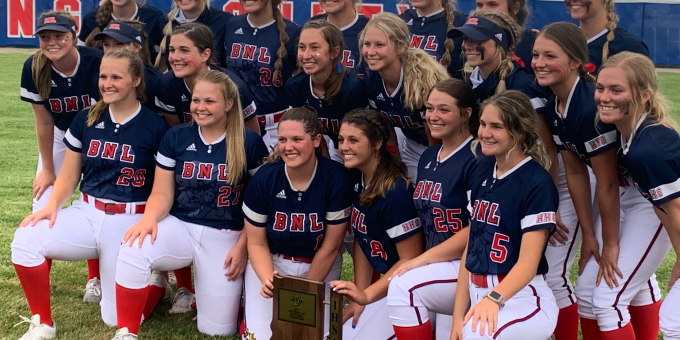 NOTRTH VERNON – With every out, Brynlea Bennett punctuated the moment with a joyous leap of celebration, getting a little higher each time while counting down toward a championship. When that final strikeout was recorded, she exploded into the stratosphere of an emotional high that was three years in the making.

Bennett and Haley Deckard, seniors who rose to great heights in clutch moments, were the offensive heroes as No.8 Bedford North Lawrence conquered Floyd Central 4-1 to win the Class 4A sectional crown on Thursday. Annie Waggoner twirled a fabulous 3-hitter in the circle as the Stars (27-4) advanced to the one-game regional on Tuesday.

Deckard, cutting down her swing when most would have swung from the heels in over exuberance, cracked out three hits and drove in two runs, and Bennett came through with two RBIs while powering the Stars to their 12th sectional title and first since 2018.

BNL will host the second round of the state tournament series and will await the winner of the Evansville North sectional.

The jubilation, screams of triumph drowning out those annoying cicadas, was understandable when Bennett accepted the trophy and hoisted it to the heavens as her team surrounded her. BNL got stunned by Jennings County in the semifinal in 2019, and last season was stunning when the entire campaign was cancelled because of the virus. This one was doubly sweet.

“It feels so good,” Bennett said. “This is exactly what I wanted.”

“It’s pretty sad that we didn’t get to do this last year, so it means even more to finally get to do it,” Deckard said. “That means everything. We stuck together, trusted each other, and got the win.”

The Highlanders (21-11) did not go down easily. BNL won the regular-season clash between the rivals 8-3 with homers by Sarah Stone and Aliza Jewell, and Jewell went the distance that April evening. Floyd kept BNL’s power attack contained this time, but Waggoner (19-1) was almost untouchable as she struck out 6 and got 13 fly-ball outs.

“She’s a great pitcher,” FC coach Sean Payne said. “We had an approach to try to hit some ground balls, and she kept popping us up. That’s her being a great pitcher, and us not making adjustments.”

BNL had to fight for its runs. In the third, the Stars were poised for an explosion as Jewell doubled off the fence, Lauryn Anderson scampered to beat out an infield hit, and Stone walked. Waggoner ripped a vicious liner to Floyd third baseman Lavin Osborne, who doubled off Jewell at the bag. But Bennett came through with a hard single to center for the first run.

The Stars struck for three in the fifth. Stone and Waggoner started the rally with singles, and Bennett followed with her second RBI hit. With two outs, Deckard drilled a double to left for a 4-0 advantage.

“Haley Deckard was huge,” BNL coach Brad Gilbert said. “We did a lot of positive things. We felt really good about this game, as long as we could get some balls to fall, we would be OK. Luckily we put four on the board.”

That would be enough, with Waggoner in control. She had complained of back pain before the contest, but doses of Ibuprofen and adrenaline got her started, and she was brilliant. Her only mistake was a monster blast to left by Floyd’s Taylor Chumbley with two outs in the sixth. Waggoner shrugged it off.

“I knew that girl was good,” she said. “I had struck her out twice with a changeup, but she got a hold of it. That happens.”

“We talked about getting base hits, and trusting each other to get base hits,” Deckard said. “My teammates were relying on me. It just worked out for me perfectly.”

BNL’s defense was also spectacular. Carlee Kern made a diving catch of a soft pop over Bennett’s head at third, and Braxton McCauley tracked down some worrisome line drives in center field. Waggoner took care of the rest.

“With our offense, we can win any game,” Payne said. “Our teams are very similar. At the end of the day, they made more defensive plays than we did.”

BNL will await the winner from Evansville, which will be determined on Saturday. The Jasper-Evansville Central semifinal was postponed to Saturday morning, and that winner will meet Gibson Southern in the final.