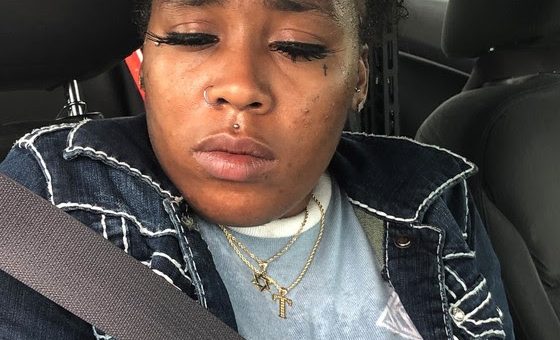 SEYMOUR – Thursday afternoon, a Louisville, Kentucky woman was arrested on numerous charges after she fled from a traffic stop on I-65 near Seymour.  The pursuit continued through three counties and lasted more than 30 minutes.

The incident began at approximately 12:45 p.m. when the Indiana State Police-Versailles Post was notified a woman stole numerous items at the Polo Ralph Lauren Factory Store at the Premium Outlet Mall near Edinburgh, Indiana.

Troopers were notified that the female was driving a white Chevrolet Impala.  The car was reported to have a Kentucky license plate and that the female had allegedly removed from the vehicle before leaving the scene.

At approximately 1 p.m., an ISP trooper located the vehicle traveling south on I-65 in Jackson County.  The trooper attempted to stop the vehicle near the 50-mile marker, just north of the Seymour exit.  He made contact with the driver who matched the description of the woman.

The trooper attempted to take the driver identified as Ta’neasha L. Chappell, 23, into custody when she pulled away from him and reentered the vehicle.  The trooper suffered a minor abrasion during the altercation.

Chappell then fled from troopers in the vehicle.  Chappell was pursued south on I-65 through Jackson, Scott, and Clark Counties with speeds reaching more than 100 miles per hour.  Troopers from the Indiana State Police-Sellersburg Post along with numerous other agencies assisted in the pursuit.

At one point during the pursuit, Chappell’s vehicle collided with the rear of a commercial motor vehicle.  Chappell’s vehicle eventually left the roadway at exit 7 on I-65 near Clarksville, Indiana, where it came to a stop after being badly damaged.  Chappell exited the vehicle and attempted to flee on foot.  She was soon taken into custody after being tased.

Another trooper sustained a hand injury during the pursuit.  That trooper was transported to a Louisville area hospital for treatment.

Numerous suspected stolen items, valued at more than $3,000 were located in the vehicle.  Police also found marijuana in her possession.

Chappell was transported to Schneck Medical Center in Seymour, for medical clearance and to submit a chemical test for intoxication.

Just prior to this incident, at approximately 11:45 a.m. the same trooper had stopped a Dodge Journey on I-65 near Seymour, after it was reported that the two occupants had just stolen numerous items from Polo Ralph Lauren Factory Store at the Edinburgh Premium Outlet Mall.

It is unclear if the two incidents are related.

The Edinburgh Police Department responded to the scene and arrested 24-year-old Haamiyna T. Kamose, and 23-year-old Da’miya K. Tooley, both of Louisville, on theft charges.  They were found to be in possession of nearly $7,000 worth of stolen merchandise.