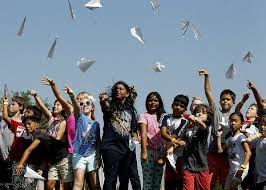 UNDATED – National Safe Sun Week, from May 24 to 30, is observed annually during the week before Memorial Day. As Americans prepare to enjoy Memorial Day weekend and embrace the start of summer, health professionals seek to raise awareness of the best practices to follow when it comes to sun exposure, ensuring that everyone remains safe as they enjoy the spoils of the warm weather.

The sun’s damage and skin cancer affect people of all skin tones. The holiday was created by MedStar Health, a not-for-profit healthcare system with numerous hospitals and healthcare services in and around Washington, D.C., and Baltimore.

Today is National Brother’s Day, so call your brother and tell him you love him, even though he’ll say you‘re weird afterward.

When you were younger, you argued over little things, what to watch on television or whose turn it was to sit in the front seat. Yet in some strange way, those childhood squabbles served to make you closer over the years.

You love ’em, you hate ’em; they can often be your nemesis, especially when they poke fun at you in front of your crush. But we know they’ll pull through for you when needed and they love you just as much as you love them.

Tuesday is National Sing Out Day. On Tuesday belt out a song, to celebrate this super fun holiday. It doesn’t matter whether you’re a professional, just a shower singer, or a pro at karaoke, this day is for everyone to sing loudly and let it all out.

Pretend the world is your audience and put on a musical show for them. Most importantly, remember to just have fun.

Tuesday is also National Tap Dance Day to honor the art of tap dancing. This dance form incorporates complex rhythmic step combinations and an expression of character through sound and body movements. Tap dancing has many styles from clogging to soft-shoe, jazz, and many more.

This fun and exciting holiday is also celebrated in other countries apart from the U.S. such as Japan, Australia, India, and Iceland.

National Tap Dance Day was the idea of Carol Vaughn, Nicola Daval, and Linda Christensen. It was first presented to the U.S. Congress on February 7, 1989, and thereafter President George H.W. Bush signed it into the U.S. American Law on November 8, 1989. It was officially observed for the first time on May 25, 1989. The date of this day has another interesting history. May 25 is actually the birthday of Bill ‘Bojangles’ Robinson, a significant contributor to tap dance

Let your inner child fly on Wednesday. National Paper Airplane Day is celebrated every year on May 26 to commemorate the fanciful aeronautical toy. Paper airplanes have fascinated children and adults alike around the globe for generations.

People all around the U.S. celebrate the day by making homemade grape Popsicles. While Thursday is dedicated to grape Popsicles, you can make them in any flavor, like lemon, strawberry, watermelon, orange, cherry, and more. Invented by accident in 1905 in California, Popsicles are one of the most popular frozen treats in the U.S. People celebrate this day by sharing grape Popsicles and other varieties of Popsicles.

Every May 28, National Hamburger Day celebrates America’s most iconic food. Americans eat more than 50 billion burgers a year, so it’s only fitting we set aside the whole day Friday for these special sandwiches. Originating in Hamburg, Germany, the hamburger as we know it was developed in Seymour, Wisconsin, a town still famous for its hamburger heroics.

Numerous deli and diner owners across the United States claim that their joint is responsible for inventing the burger. However, there seems to be some consensus amongst historians that the food as we know it today truly gained popularity at the 1904 World’s Fair in St. Louis, an event that also gave us the ice-cream cone. However it happened, the hamburger has grown to be one of the world’s most widely consumed food items, found on menus from Texas to Thailand. They can be had for a dollar apiece or made from gourmet ingredients that cost hundreds. However you decide to chow down, this day is for you. Fire up the grill, gather round your friends, and cook up some delicious burgers.

National Don’t Fry Day is celebrated on the Friday before Memorial Day (last Monday of May), which falls on May 28 this year. And yes, the pun is intended. It has been designated by the National Council on Skin Cancer Prevention as a reminder for everyone to protect their skin as they usher in the summer and prepare to enjoy the great outdoors.

It is also to raise awareness about sun- safety methods and all the harmful effects that overexposure can have. According to the organization, the motto for National Don’t Fry Day is ‘Slip, slop, slap and wrap’ — slip on a shirt, slop on sunscreen with the appropriate SPF (30 +), slap on a wide-brimmed hat, and wrap some cool shades on those eyes,

Put a Pillow on Your Fridge Day is celebrated on May 29 and it’s meant to bring you prosperity and good fortune. The name of this day is quite literal, for on this day people are to put a pillow on their fridge for the magic to work.

In the old tradition, people would put their pillows inside of their fridge for this ritual to work, but not everyone finds sleeping on a chilly pillow all that comfortable. You’re more than welcome to try that instead to honor the old ways, but only if you can withstand the cold.

Pillows have come a long way from their rustic origins. It’s believed that pillows have existed since 7000 BCE, in early Mesopotamia. Back then, they were made of stone and while that couldn’t have been the most comfortable, it is believed that they kept bugs from crawling into their mouths, noses, and ears. Egyptians believed that the head was the seat of spiritual life and used different materials like marble, ivory, stone, ceramic, and wood as pillows.

The ancient Greeks and Romans created pillows that were closer to what we use today. Common people of the time used materials such as cotton, straw, and reeds, while the wealthier citizens stuffed their pillows with soft down feathers. Despite the change in comfortability, people didn’t use them all that often, especially those who couldn’t afford the extra expense.

During the nineteenth century, the Industrial Revolution made the pillow common. At this time, almost every household used pillows. The industrialization of many processes made them more attainable to the common person and more affordable because they were mass-produced. The engineering of the pillow continued throughout the years and materials such as cotton, linen, silk, and velvet were used for pillows. Throw pillows were even used as decorations for rooms.

Today, there are many pillow brands offering people a great range of options to suit their specific needs. There are gel pillows, boyfriend pillows, and body pillows to help people find peace while they sleep. The exact origins of Put a Pillow on Your Fridge Day isn’t known, but many believe that it’s a modernized version of the old tradition of putting linens in the pantry to bring good luck. No matter what you believe in, everyone can agree that now that we have the pillow, we can’t imagine sleeping without it.

Sunday is Indianapolis 500 Day. They call it “The Greatest Spectacle in Racing” — for a reason.

The Indianapolis 500 is the world’s most iconic automobile race. Indy cars, as opposed to the stock cars of NASCAR, whiz around the 2.5-mile oval track at speeds exceeding 200 mph for a total of 500 miles. (That’s 250 times around!) First run in 1911, the race is now held on the Sunday of Memorial Day weekend at the Indianapolis Motor Speedway — known to race fans around the world as the Brickyard. If you go, get there early, bring sunscreen, and get set to witness motorsports history.

Frenchman Simon Pagenaud qualified with the top speed this year — making him the pole-sitter — meaning he’ll start the event on the inside of Row 1.