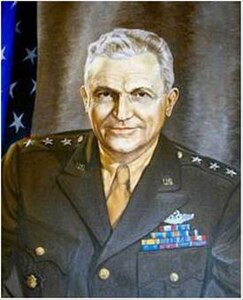 WASHINGTON – U.S. Senator Mike Braun along with Senators Cardin (D-MD), Van Hollen (D-MD), Tillis (R-NC), Gillibrand (D-NY), and Blackburn (R-TN) reintroduced a bill to authorize a posthumous promotion for Lieutenant General Frank M. Andrews to the rank of General for his contributions and service to the United States before his death in 1943.

“Lieutenant General Andrews, the namesake of Joint Base Andrews in Maryland, left a sterling record of service to our country that makes him profoundly deserving of this honorary promotion. Lieutenant General Andrews’ military career spanned 37 years and encompassed the final days of the horse-mounted cavalry to massed heavy bomber formations. He helped usher in a new technologically sophisticated modern military, one that harnessed the industrial might of the United States to dominate the land, sea, and air.”

From 1940 to 1943, LTG Andrews would lead a series of critical commands—the Caribbean, Middle East, and European theaters. General Marshall, with an eye for the future cross channel invasion. This new theater was initially bomber focused, with the 8th Air Force and the Royal Air Force conducting ever more effective bombing raids in occupied Europe.

LTG Andrews was a natural fit for this new command and was appointed. LTG Andrews also oversaw the plans being developed for the future invasion of Western Europe, laying out the massive logistical requirements to support the projected naval, ground, and air forces needed for this historic undertaking. In May 1943, LTG Andrews was on an inspection tour of Iceland. Following an aborted landing attempt, his B-24 bomber crashed into a hillside. He was killed on impact.

LTG Andrews is known by many in the military as the “Founding Father” of the United States Air Force and Andrews Air Force Base in Prince George’s County, Maryland is LTG Andrews’ namesake.