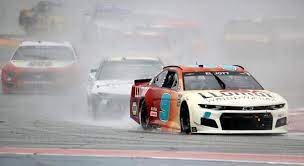 NASCAR’s reigning road course king Elliott was the one who ended up displaying his mastery of turning left and right on a soaked track.

The race was stopped after 54 of 68 laps due to heavy rains and poor visibility with Elliott in the lead. Elliott’s win is the first of the season for the defending Cup Series champion, and the sixth road course victory of his career.

Variable rains persisted throughout the race, creating hazardous racing conditions before heavier rains created a dangerous situation mid-race. Due to standing water on the back straightaway, two major crashes occurred due to lack of visibility.

Christopher Bell crashed after running into the back of Ryan Blaney, and then Bubba Wallace drove underneath Kevin Harvick’s car, as Wallace was unable to see Harvick slow down for the crash On the ensuing restart, a similar and more frightening crash occurred when Martin Truex Jr. ran into the back of Michael McDowell, and was then run into by Cole Custer coming at full speed. Custer’s car drove underneath Truex’s and then slammed the inside guardrail driver’s side before catching fire. None of the drivers were injured, but multiple – most notably Harvick – were openly critical of the racing conditions from a driver safety standpoint.

The race was red-flagged so that NASCAR could remove standing water, and the race continued without major incident until conditions deteriorated late in the event. The red flag came out just in time for Elliott, as he was unlikely to make it to the end of the race on the load of fuel he had aboard his No. 9 Hendrick Motorsports Chevrolet.

After dropping to the rear of the field on the pace laps due to an engine change, the No. 14 elected to start the race on slicks. However, as the drivers were approaching the initial green flag, Briscoe reported the track conditions had changed and it would be difficult to maneuver the course without wet-weather tires.

Crew chief Johnny Klausmeier called the HighPoint.com driver to pit road upon completion of lap one, and Briscoe received four wet-weather tires. He advanced quickly up to the 20th position on lap four, as Klausmeier radioed that the No. 14 was the fastest car on rain tires.

Briscoe was scored 19th when the first caution of the race occurred on lap nine. He stayed on track when several cars pitted and inherited the 11th position. When the race returned to green on lap 10, he moved into the seventh position.

The No. 14 narrowly avoided trouble with two laps remaining in the stage, and Briscoe held on to finish Stage 1 in seventh.

At the break, Briscoe reported his racecar’s turn got progressively worse and the front turn was worse. He pitted under caution for four tires, fuel, and adjustments. The No. 14 was the first car off pit road of those that made a stop, but with leaders staying on track, Briscoe lined up 23rd for the second stage.

The HighPoint.com driver gained six spots on the restart at the beginning of Stage 2 to sit 17th when the yellow caution flag waved on lap 19. Briscoe stayed on track while several cars elected to pit, and he lined up 10th for the restart on lap 25.

The field completed just one lap before the yellow flag was displayed again, with Briscoe scored 13th. The field then was parked under a red flag for close to 21 minutes, with Briscoe updating the team that he couldn’t see anything due to the wet conditions. When the race returned to yellow-flag conditions Briscoe did not pit, restarting 10th for the final four laps in the stage.

The HighPoint.com driver battled for position over the closing laps and finished the stage in ninth.

The rookie driver steadily worked his way back up to the top-five before making his final pit stop of the race under green-flag conditions on lap 45. He received fuel and a chassis adjustment after requesting more forward drive and telling the HighPoint.com team that he was too tight on the left-hand turns.

Briscoe returned to the track in 14th and advanced to sixth as green-flag stops cycled through.

With 14 laps to go, the sixth caution of the race and second red flag was shown for the weather with the HighPoint.com Ford Mustang scored sixth.

Briscoe earned his first top-10 finish of the season when NASCAR determined the race could not continue.

The next event on the NASCAR Cup Series schedule is the Coca-Cola 600 on Sunday, May 30 at Charlotte (N.C.) Motor Speedway. The race begins at 6 p.m. EDT with live coverage provided by FOX and SiriusXM NASCAR Radio.