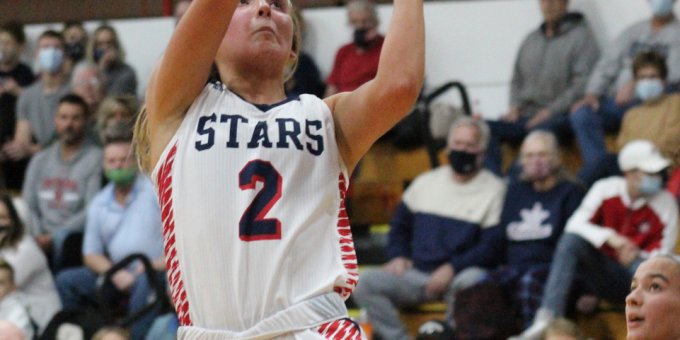 BEDFORD – Chloe Spreen looks fantastic in red, white and blue. Her freshman season at Bedford North Lawrence is testament to her fashion sense and game coordination. Yet, as good as she wears the BNL gear, she’d look even better in another uniform with the same patriotic colors.

Spreen, ranked among the top players in the nation in the class of 2024 by espnW, has been invited to compete for a spot on the U16 national team. She will report to team trials in Indianapolis on June 13-16. The top 12 from the original roster of 30 (20 invited and 10 selected applicants) will comprise the squad that will participate in the 2021 FIBA Americas tournament in Santiago, Chile in August.

The top four teams in that prestigious event will qualify for the 2022 U17 World Cup. That’s high-level recognition and dream-world possibilities.

“It’s definitely been a huge goal of mine for a while,” Spreen said. “Just to be invited, I’m really thankful for that. I have lot to prepare for, to make plays and knock down shots, everything I can do. I’m really excited. It’s a dream. I’m just grateful to even get an invite. It shows that hard work pays off.”

Spreen’s freshman campaign for the Stars certainly deserved such a reward. Despite playing out of position, asked to patrol the paint at the 5 spot and defend the post rather than roam free on the perimeter in her natural element, Spreen led BNL in scoring (14.8) and rebounding (5.5) and played a key role in a 22-3 season that included another Class 4A sectional title.

She came into the campaign with her reputation preceding her, yet she lived up to preseason predictions of greatness.

“I knew there were a lot of expectations on me,” Spreen said. “I just wanted to go out there and play my game. Being on the court with other really good players, it was hard to meet all the expectations everyone had. But I think it went well, just being out there with that group of girls.

“Playing against good teams, it was definitely hard at times – the physicality of it, the speed of the game. And a big challenge was being put at the center spot. But it was something I added to my bag. I’m glad I got to learn that. It was definitely a challenge. At the end of the day, I just practiced and got better at it.”

Since the end of the BNL season, Spreen has switched to her Nike Lady Gym Rats travel team. It’s quite a constant workload, but she loves the game with burning passion. She has not slowed down.

“I definitely have a big love for this game, and I don’t want to burn out or have my body break down,” she said. “There are times you have bad days and you don’t want to be there, but most days I just love it. I just keep myself motivated. It pushes you to become better. The harder I work, the more I fall in love with it. And it’s not just the game, it’s the people you’re playing with, everything around it.”

Earning a spot on the national team would only add to the scrutiny and recruitment pressure. Spreen has already attracted attention from most major programs and early offers from several. That major decision is still multiple months away. She just enjoys the relationships she has established. At some point, she will make one program ecstatic and all others extremely disappointed. That’s just the nature of the recruiting game.

“It can be overwhelming, but I love talking to coaches,” Spreen said. “You want to build the best relationship you can, because that time will come soon. That decision will come soon.”

Meanwhile, Spreen will continue to work on her overall game. She wants to improve her perimeter shot (she made 24 percent from 3-point range for the Stars), get better at creating her own open space. She hopes to impress U16 head coach Adrienne Shibles (Bowdoin College) and assistant Katie Gearlds (Purdue) to secure a coveted spot on the squad.

The U16 trials will include a four-day camp before team selections are announced. The final 12 will remain in Indianapolis for three more days of workouts, then gather again in early August for 10 days of practices before visiting Chile on Aug. 16-22.