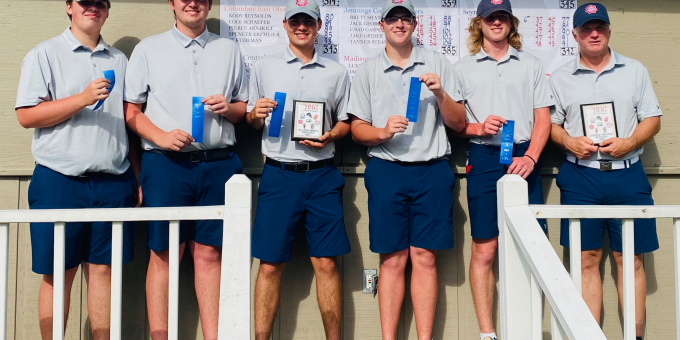 SEYMOUR – Every shot matters, and Bedford North Lawrence certainly proved that, winning the Hoosier Hills Conference championship by the slimmest of margins.

The Stars – who carded a birdie, an eagle and a clutch par putt on the 18th hole at Shadowood to finish in grand style – claimed their first league title since 2016, edging No.14 Floyd Central by a single stroke. BNL posted a season-best 314 while the Highlanders fired 315 in the two-team battle for the top spot.

Colten Girgis paced the Stars with a 4-over 76 to earn All-HHC honors, while Jett Jones (78) and Camden Andrick (79) posted crucial scores to power BNL to its 20th overall HHC crown.

“We’ve been chipping away. I knew, if we played our best and got a little help, we could get them. It was a great team victory. Every shot does matter.”

Girgis carded three birdies (holes 7, 11 and 15) and capped the round with the eagle on the par-5 18th. Jones, who eagled the par-5 5th hole after a smashed 300-yard drive and wedge approach, added birdies on holes 1 and 12 before capping the day with a birdie on 18.

“It feels awesome,” Jones said. “We thought we had a chance since we’ve started to play like we’re capable of playing. I think it started kicking in when we shot 317 at Cascades (on May 11). We’ve all gotten better. We’ve been striving for greatness.”

Andrick post his career best with three birdies, and a clutch 12-footer for par on the final hole. Every shot was critical.

”It was very nerve-racking,” Andrick said. “It’s a little surprising, knowing how low the scores where. As a team we celebrate together, so it makes it even better we got first.”

BNL, which shot 357 in the season-opening tournament on the same course, will return to Shadowood on Tuesday to face Seymour and Providence. The Stars still have two weeks to prepare for the sectional at Cascades (on June 7).

“We have a lot of things left to do,” Andrick said. “We’ll see what happens.”