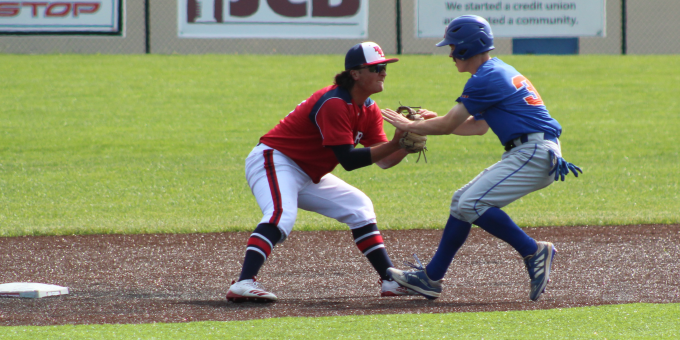 BEDFORD – Baseball, a sport with more failure than success (by at least a 70-30 ratio), demands a short memory, requires a mental toughness and discipline. Forget the frustration, or else slip a little closer to insanity with each swing and a miss.

Evan Waggoner, over the course of his three-year career at Bedford North Lawrence, has learned that. Even the best, and Waggoner has earned a place on that list in school history, fall down a few times. Prime example, BNL’s split of games during the annual Orval Huffman Invitational on Saturday.

In the opener, Waggoner had the outcome on his bat. The Stars trailed 2-1 in the bottom of the seventh, bases loaded, one out. Waggoner popped up, which in baseball reality is a matter of a tenths of an inch on the barrel of the weapon. The Stars lost. Next game, just a few hours later, he blasted a ball off the center-field fence and walked twice. The Stars thumped Northview 8-2. Don’t try to figure out this puzzling, perplexing game. It’ll drive the best a little nuts.

Class 3A No.4 Silver Creek dodged the late BNL bullets to clip the Stars in the first game, while BNL (18-10) bounced back in the consolation game to conquer the Knights with clutch hits by Colton Brown and Kline Woodward.

Lawrence North thumped Northview 10-1 in the second game, with Silver Creek (20-8) clipping the Wildcats 5-4 in the finale.

The opener was a classic duel. The Dragons scored two quick runs in the first inning against BNL’s Braydon Brown, who surrendered singles to Dominic Decker and Colin Kapust before Holden Groher walked to load the bases with one out. Jace Burton cracked a two-run single before Brown escaped more damage.

From that point, Brown kept ‘em down. He gave up a lead-off triple to Decker in the fifth but refused to give up any more runs. However, the Stars were struggling against Silver Creek’s Groher, who didn’t allow a clean hit until Cole Karr’s rocket off the third baseman’s glove in the sixth.

BNL got its chance in the seventh. Decker came on in relief and walked pinch-hitter Ryker Hughes before Aden Pemberton ripped a single to left. Colton Brown was plunked by a pitch, and Karr walked to force in a run. But Decker got Waggoner to pop out and Whitt Callahan to ground into a force play to end the threat.

“We had some chances at different times, but we just can’t get that big hit,” BNL coach Jeff Callahan said. “We didn’t give up, we battled back and had the bases loaded, one out. We had our 3-4 guys up, down one run, and I will take that any day of the week. I’ll roll the dice with Evan and Whitt. It just didn’t happen.”

In the second game, BNL trailed 2-0 before shifting gears in the third. Pemberton singled to start the comeback, and Colton Brown launched a triple to center. He scored on Karr’s sacrifice fly. Waggoner restarted the rally with his bomb to center, and his pinch-runner (Trace Rynders) later scored the go-ahead run on Kline Woodward’s RBI single.

“It’s maturity,” Waggoner said of his quick bounce back. “My freshman year, I struggled until the end of the season because of that. I worked hard, got a little older. I think that’s where it has come from. It’s being patient, trying to see the ball. There’s not much more to it. As opposed to swinging out of my shoes.“

Waggoner, signed with the University of Evansville, never does that. He has not homered this season and has only two in his career. But he has hit a ton of line drives. His two walks raised his season total to 23 and his on-base percentage to .500. He will not give in to swing at the pitcher’s best.

“Not only has he hit the ball well, but they’ve pitched him tough this year,” Callahan said. “That’s what you’ll get when you’re going to Evansville and you’ve played a lot of high-level travel ball. He’s been a kid willing to take the walks, versus pressing and trying to swing at pitches that are marginal. He’s done a fantastic job.

“And behind the plate, he limits a team’s ability to run, he saves so many ball from wild pitches and giving up extra bases. He’s been an iron man.”

BNL pulled away from Northview with two runs in the fourth (Colton Brown’s sacrifice fly plated one, and Pemberton scored on a passed ball), two more in the fifth (Kline Woodward scorched a RBI double to left and pinch-runner Jacob Foster scored on a wild pitch) and a final run in the sixth (Foster’s RBI single).

Pemberton was 3 for 3, Colton Brown and Kline Woodward had two hits each. Hughes worked the first 3 2/3 innings for the Stars, allowing two runs in the third, before Kline Woodward came on in relief with 3 1/3 innings of one-hit ball with nine ground-ball outs.

“Pitching and defense,” Callahan said. “We don’t have guys who will strike out 8-10 guys. But they will compete, throw pitches for strikes and locate. Braydon pitched his guts out, he just battled out there. I was proud of him for that.

“That’s the thing I like about this tournament, it’s very competitive. There are good teams that are sectional-caliber teams.”

The tournament was named for the former BNL coach, who guided BNL to two state finals appearances and was elected to the IHSBCA Hall of Fame in 1987. Huffman posted a career record of 420-155 in 28 seasons.

BNL is almost in sectional mode. The Stars will close the regular season on Monday, hosting Class A No.9 Loogootee, before starting to prepare for Jeffersonville in the sectional semifinal on May 29.

“We’re still not playing our best baseball,” Waggoner said. “We’re in a great position to do some damage.”