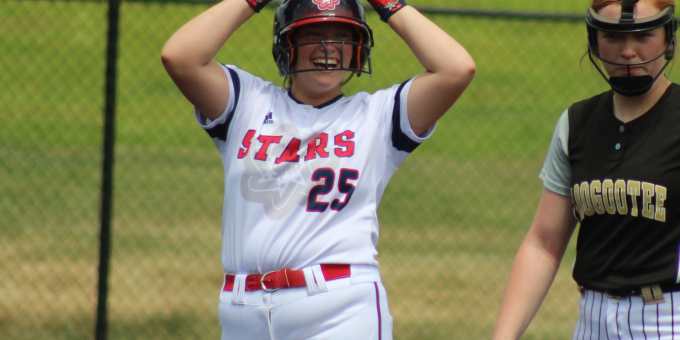 Well, there might have been a few tears. For six seniors who played their final home game, for the chance to play a complete season and set a school record for success, it’s understandable for the emotions to overflow. That’s why Bedford North Lawrence coach Brad Gilbert waited until after the game to honor his departing upperclassmen. “We don’t cry before a game,” was his logic.

The Stars were in a league of their own during Saturday’s regular-season finale, forcing Class A No.4 Loogootee to weep internally a little in frustration as Class 4A No.4 BNL blasted to a 10-0, six-inning triumph. Carlee Kern and Braxton McCauley hammered home runs, and Annie Waggoner was wicked in the circle while allowing 4 hits and striking out 8.

But the focus was on the seniors, the six who started and who helped this team set a new school record with the 25th win this season. BNL honored Bri Foddrill, Sarah Stone, Brynlea Bennett, Haley Deckard, Brylee Blackwell and Alivia Davis with postgame ceremonies. After the entire 2020 campaign was canceled, this class made sure BNL’s program did not miss a beat after missing a year.

“I’m excited for the seniors,” Gilbert said. “It was a great senior game. Just to show what kind of leaders we have, this teams gelled probably like no other team. We are usually together a lot in the offseason, and this team wasn’t (because of virus restrictions). It’s been exciting to see that leadership.

“Every one of them will go on to do great things, because they’re great kids. They think about their teammates so much, it’s pretty exciting.”

From the ashes of a torched year, BNL has risen to new heights. The victory over Loogootee raised the record to 25-4.

“You don’t ever want to miss out on a year,” Blackwell said. “And the chance of missing two years in a row was terrifying. So this is really great. We’re a team that works together really well, and we have good chemistry. Being a part of a team that can be this good is amazing.“

BNL started slowly for this win, scoring two runs in the second. McCauley was hit by a pitch, and Deckard reached on an error. Deckard allowed herself to get trapped between first and second, hoping McCauley could dash home, and that’s exactly how the play ended as the Lions attempted to keep Deckard at first and McCauley at third – and accomplished only the former. Carlee Kern singled and later scored on another Loogootee error.

The rest of BNL’s runs came via the usual production – power. Deckard screamed a vicious line drive off Loogootee pitcher Isabelle Waggner, and Kern followed with a thundering home run to center for a 4-0 lead in the fourth. Two innings later, Waggoner singled and McCauley crushed a homer to right center to make it 6-0.

The Stars struck for the final 4 runs to enact the mercy rule in the sixth. Stone launched a sacrifice fly, Bennett belted a two-run double, and McCauley drove in the final run with a lashed single to right as Bennett trotted home.

Waggoner, McCauley had Kern all had two hits each for the Stars. Waggoner improved to 17-1 in the circle, and her defense helped her protect the shutout. BNL threw out Waggner at second when she rounded the base too far, Stone nabbed a runner at third with a rifle throw, and the Stars turned a double play. Waggner had two hits for the Lions (16-7), and coach Greg Clark struggled to vent his frustration.

BNL will not celebrate this win long. The postseason is the next step, starting with New Albany in the sectional semifinal at Jennings County on Tuesday.

”Because we’re not done,” Gilbert said. “We talked about 25-4 and that’s great, but we start again about midnight tonight. We have to start thinking about being 0-0, and we have to survive and move on. That’s what we’re going to do.

“This team has set the bar pretty high. It’s exciting. What that says is this team was ready to show up most of the time. It was tough, for 29 games, to be ready every time. We’re everyone’s target, we’ve been ranked in the top 10 most of the season and so we get everybody’s best game.

“I’m sure there are a lot of people in the dugout that wish they had more time, more hits, more chances. It shows how good this team is. It’s not just nine, we’re deep. They stayed with it and didn’t get frustrated. They know we could be something special.”

“Starting from scratch,” Blackwell said. “We’re trying to stay focused, not get a big head.”

The sectional will begin on Monday with Jennings County facing Floyd Central in the opener, followed by the clash of Seymour and Jeffersonville. The final is set for Thursday.