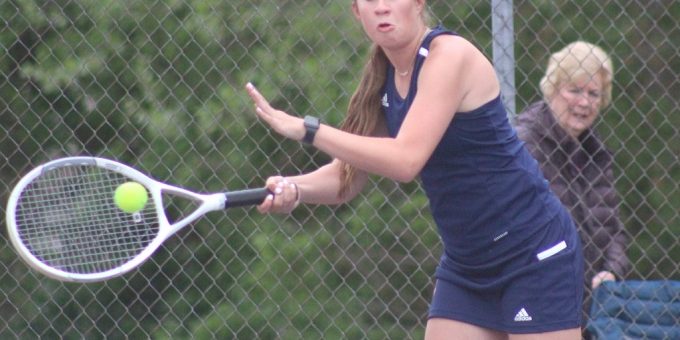 BLOOMINGTON – Bloomington North won a pair of three-set thrillers in doubles en route to a tough 5-0 victory over Bedford North Lawrence in the tennis sectional final on Friday.

The Cougars won their 16th sectional championship in program history and advanced to the four-team regional at Bloomington South. The Stars finished the campaign with an 8-9 record.

“We lost, but not without a fight,” BNL coach Joni Stigall said.

North, which conquered BNL 5-0 during the regular-season meeting, had to work overtime in doubles. Ellie Bruce and Keira Murphy fought off Bella Stigall and Mallory Pride 6-4, 4-6, 6-1 in a slugfest at No.1, while Siggy Force and Rena Cohen rallied to conquer Kenley Craig and Izzy Alldredge 3-6, 6-4, 6-2 at No.2.

“Bella and Mallory played hard,” Stigall said. “They played two really great players who hit hard and volleyed almost perfectly. I think by the third set our tank was a little empty. They truly had to fight for every single point. They had a great season and the next couple of years will be fun to watch.

“Kenley and Izzy started very strong, and then again I think they ran out of gas as the match went on, especially in the third set. They have far exceeded my expectations this year for two freshmen who weren’t even sure how to volley.”

“Rachel’s score looked bad but she played well,” Stigall said. “She has taken it for the team, match after match, and I am so proud of her attitude and commitment to this team. Emily surprised me with how tough she has been. Our record would not be what it was without her.

“Becca is young, so I’m excited about her future on this team. I know she will work, probably harder than anyone, and once she gets her feet wet in the game she will be tough to beat. Our future looks bright as long as we keeping working hard.”

North will face Columbus North (which won its seventh straight sectional with a 5-0 win over Edinburgh) in the regional semifinal on Tuesday.