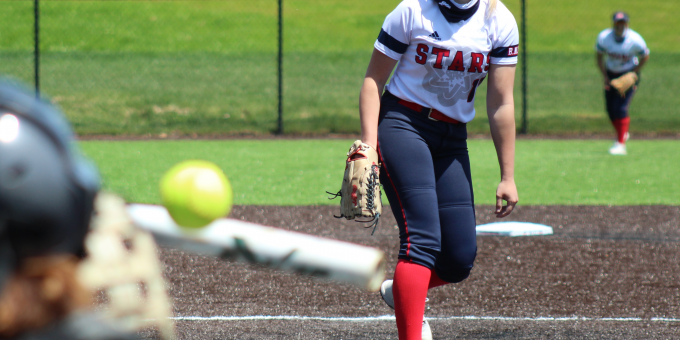 Jewell (8-3) worked six innings in the circle, surrendering only five hits and striking out four as the No.7 Stars (24-4) closed their regular-season road trips with an impressive triumph. Brynlea Bennett broke open a close contest with a huge two-run double while sparking BNL’s second straight win.

The Stars also broke the school record for wins in a season. The previous mark was 23 in 2018.

“Aliza moved the ball around, hit her spots for the most part,” BNL coach Brad Gilbert said. “She pitched a nice game. This was a big game for us. They were certainly a quality team. It was nice to play well.”

The Braves (17-10 with the end of a 13-game winning streak) got one back in the fourth on back-to-back infield singles by Faith Thomas and Lexi Cottrell, followed by Jasmine Kinsey’s RBI single to center. Stone, after taking a late throw at the plate, cut down Cottrell as she attempted to scamper to third base to limit the damage.

BNL answered with a four-run fifth. Jewell started the rally with a single, Anderson sacrificed her to second, and Stone got aboard on an error. Annie Waggoner walked to load the bases, and Bennett banged her two-run double to left. Haley Deckard’s liner to left was misplayed as two more runs scored for a 6-1 advantage.

“We had people hit the ball well,” Gilbert said. “They had been jammming Brynlea, and she made a good adjustment. That was huge. You always want to add on runs. That’s what we haven’t had lately.”

The Stars added a final run in the seventh on Carlee Kern’s RBI triple.

Bennett, Kern, Braxton McCauley and Jewell all had two hits each for the Stars. Terre Haute South was guilty of three errors that allowed four unearned runs.

BNL will conclude the regular season and celebrate Senior Day on Saturday against Loogootee.