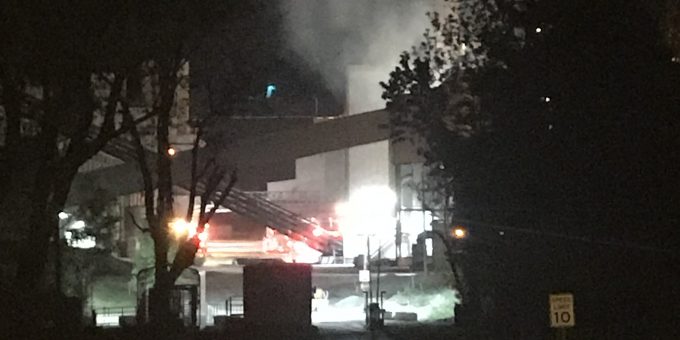 MITCHELL – Marion Township and Mitchell Fire Departments were dispatched at 3:58 a.m. to a kiln fire at the Lehigh plant.

When firefighters arrived on the scene they were directed to Kiln #2.

Firefighters used a thermal imaging camera to look into the kiln. Firefighters discovered that the oil used in the kiln overheated past its ignition point due to a motor malfunctioning.

A typical process of manufacturing concrete consists of three stages: grinding a mixture of limestone and clay or shale to make a fine “rawmix”; heating the rawmix (lime, silica, alumin, and iron oxide) to sintering temperature (up to 1450 °C or 2642 °F) in a cement kiln; grinding the resulting clinker to make cement

“Water was not an option to extinguish the fire due to the nature of the fire. Firefighters had to use dry chemical extinguishers to combat the fire. All of the dry chemical extinguishers that the fire department had were used, and some from the Lehigh plant to keep the fire from getting worse. Crews found that the clutch that engaged the motor was stuck in the open position and not allowing the motor to engage and turn the kiln. Repairs were made to the motor by Lehigh personnel and the kiln was allowed to turn. This mixed the cool parts of the process with the oil and product to bring the oil down below it’s ignition point. The firefighters working with the Lehigh employees were able to bring this fire under control pretty quickly. Fire dept turned the scene back over to Lehigh personnel at 6:21 a.m.”