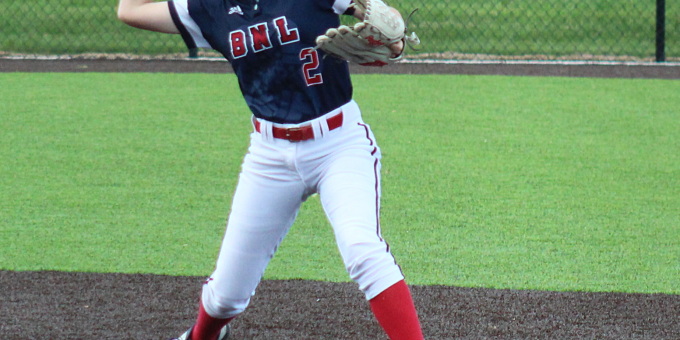 ELLETTSVILLE – Bedford North Lawrence felt the heat from one of the state’s elite and could not douse the flames.

Roncalli sophomore phenom Keegan Rothrock struck out 14 and didn’t allow a base runner through six innings while torching the Stars 4-1 in the second game of the Edgewood Invitational on Saturday. BNL, ranked No.6 in Class 4A, conquered 3A No.3 Edgewood 7-0 in the opener.

Rothrock, ranked the best player in the nation in her class, lived up to her billing. She throws 70 mph, the reason she’s already committed to the University of Florida, and BNL couldn’t keep up with that speed. The Stars finally broke through and broke up Rothrock’s no-hit bid when Lauryn Anderson led off the bottom of the seventh inning with a single, a short-hop line drive to third base off the glove of the defender.

Anderson advanced to second on an error and later scored when Sarah Stone reached on an error. That was the extent of the BNL offense.

“We had some good at-bats against her. Once you go through the lineup, even though we didn’t get a lot for it, we had good looks. We gained valuable information. We haven’t seen anyone like her.”

Roncalli (22-2 and ranked No.4 in 4A) scored a run in the first. Lyla Blackwell tripled and Kylie Freije followed with a single. In the third, the Royals added another run on three hits, with Gracie Holok delivering a two-run single at the end of that attack.

But the story was Rothrock, who added to her impressive numbers of strikeouts this season (now up to 230) and a minuscule 0.24 ERA. She now owns a 15-2 record. She also struck out 17 and fired a no-hitter during a 5-0 victory over Edgewood before facing the Stars.

In the opener, the Stars (22-4) ambushed the Mustangs with a 6-run first inning, sending 10 batters to the plate.

Anderson started the rally with an infield single and Sarah Stone doubled to left. Annie Waggoner walked to load the bases, and Braxton McCauley followed with a two-run single. Brynlea Bennett’s ground out made it 3-0, and Haley Deckard reached on a dropped third strike as McCauley scored for a 4-0 advantage. Carsyn Alvey ripped to two-out, two-run double to conclude the early explosion.

BNL added a run in the second when Stone walked and Waggoner singled. Stone scored when Edgewood’s left fielder misplayed the Waggoner hit.

“It was a great first inning,” Gilbert said. “I’m not sure you can draw it up any better.

“We came off the bus ready to go. We didn’t know how the team would react after the loss to Seymour (on Tuesday), and we came out with six on the board. I was really pleased. For us to compete like we did today, I was really proud of the effort. The kids battled, and that’s what we need to get ready for the postseason.”

Waggoner (15-1) went the distance in the circle, scattering six hits and striking out 10. She left a runner on third in the third and the bases loaded in the fifth to escape threats. Stone, who was battling a stomach bug, paced the offense with two hits.