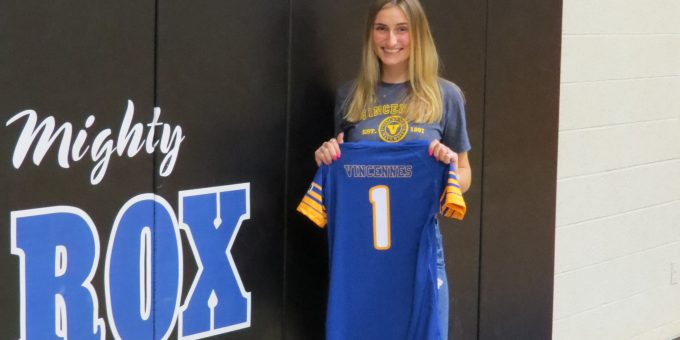 Roush is the daughter of Cody and Michelle Roush and says that she plans to major in nursing at Vincennes University.

“I wanted to stay close to home, so I started looking around locally and I had a few friends that went to school at VU and I decided to reach out to Coach Sien to see if he had a spot for me,” Roush said. “Luckily, he had a spot, so late in the year. It was a win-win for me because I got direct admission into the nursing program and the school is only a couple counties away for everyone can come watch me play next season.”

Roush is a six-foot tall middle blocker and outside hitter, who helped guide the Jug Rox to a 13 – 16 record this past season.

In 59 sets played, Roush finished her senior season at Shoals with 94 kills, 72 blocks and 47 digs.

Her 72 blocks helped her win the 2020 Blocking Award at Shoals.

“I’m really hoping to bring my positive attitude to VU,” Roush added. “The first two years of my high school career were rough, then the last two years we got a new coach and she was really great. It was nice to get a nearly completely new program at Shoals and it changed my outlook on everything. It changed how I played and she helped me make changes to my game and I feel like that has helped me improve a lot as a player. So, I hope to bring all of that to VU next season and add to their program as well.”

“We wish Kaley the best of luck in her future at Vincennes University,” Shoals volleyball coach Marsha Archer said. “Kaley is a solid blocker and will be an asset to the Trailblazers team.”

“Kaley is another front row player we have in the fold who can play multiple positions,” VUVB head coach Gary Sien said. “We like her blocking ability, which typically is a strength of our teams’ year in and year out.”

“She has had some opportunities to play as an outside hitter in six rotations for her club team, which is a good thing. You want to be as complete a player as you can,” Sien added. “We want all of our players to be competing for playing time in more than one spot.”

The VU Athletic Department welcomes Kaley Roush to the 2021 recruiting class and wishes her well as she finishes her senior year at Shoals High School.