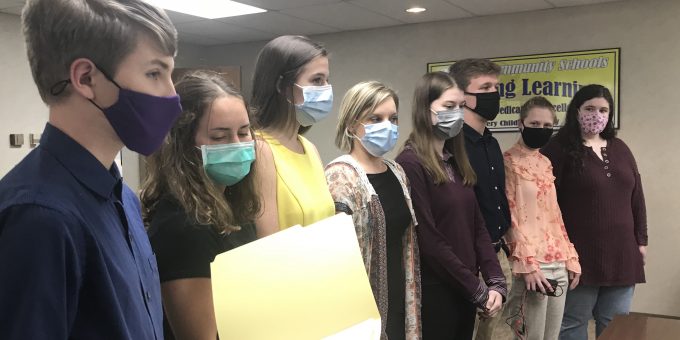 Students from the physics, calculus and environmental science classes used their skills, and research on the project to present their final proposal to Mitchell Community School Board.

Because of the opposite charges of the layers of silicon, these electrons move down between the two layers and then to the conductive metal plates, where they join a current that flows through wires into the inverters.

This will be a DC current to an AC current by switching the connection back and forth very quickly, sixty times per second, to be exact.

These inverters are also transformers, which will increase the voltage to 480 volts, the voltage our school uses. They will have eight invertors, and each inverter will have a large group of panels connected to it in a string.

Placement of the Panels

After meeting with an architect and with a solar panel specialist, we determined that the best place on the roof to put the solar panels would be on the gymnasium and the Junior High. This was determined by the amount of shade covering each part of the roof and which areas were flatter. We also looked at the High School roof to place the solar panels, but the highest section of the High School after roof construction will be covered by shade.

The wiring for the solar panels also needs direct access to the school’s main electricity source, making the Junior High and gym the best places because of the location of the boiler room. The solar panels would be 10 feet from the boiler roof’s edge so that they reach maximum efficiency without being a safety risk for maintenance and installation.

In order to make the solar panels as efficient as possible, they will face south and be placed at an angle. This is because the south receives the most sunlight so the solar panels will convert more electricity.

With the placement and number of panels, they will produce approximately 44.4 percent of our school’s electricity. The percentage not covered by the solar panels will be provided by our current energy source. The maximum efficiency percentage of each individual solar panel is approximately 20 percent.

The solar panel specialist also confirmed that most of the construction to install the solar panels could be done during the summer. The total time from the deployment to commissioning would take 3.5 months. If construction is done throughout the summer months, there will be little or no disruption to those in the building.

This will also allow the installers to avoid periods of late October to late April for safer roof work. Rather than creating holes in the roof by screwing panels down, a non-slip sheet will be placed under the solar panels, adding an extra layer of protection for the roof and the solar panels.

By not adding any holes to the roof, maintenance will be little to none. During the winter months, snowfall will have to be watched in case there is too much build-up, but even then, little maintenance will be required. The solar panel specialist has chosen the Duomax Twin Models for the panels. This model is resistant to sand, dust, and alkaline, making them certified to withstand challenging environmental conditions.

Based on our proposed plan, we will install 1,134 solar panels and 8 inverters on the new roof. With this amount of solar panels, the estimated total investment is approximately $689,468.

Between January 1st and December 1st of 2020, a series of electricity bills were charged to Mitchell Community Schools, totaling $118,179. A predicted annual bill after the solar panels are installed would only total up to $67,778, yielding an annual electricity savings of $50,401.

The solar panels will produce 44.4 percent of the energy consumption in the building. After taking into account the cash investment and the avoided utility costs, the payback period is calculated to 11.9 years. This means in approximately 12 years, the money spent on solar panels will be paid off by the total savings.

KWH to be saved per year:

Our energy is currently provided by coal, so by converting to solar panels, greenhouse gas emissions at our school will be greatly reduced. By reducing our coal intake we can begin taking other steps towards a healthier environment. Our current bill is at 1.259,000 kWh. With our solar plan, it will change to 712,889 kWh, we will be saving 546,111 kWh.

By the addition of solar panels in our community, we have assured a lower rate of greenhouse gas emissions. If more locations can acquire solar energy we can reduce the effects of climate change.

This year in physics students was able to apply what they learned in class to a real-life project that changes their school for the better. This project allowed them to learn how the solar panels worked and taught them a more hands-on approach by looking at the layout, efficiency, and maintenance involving solar panels.

Throughout the school year, students have worked towards where they could explain the economical reasons and math behind getting solar panels. This allowed the students to stay motivated and have a reason to learn new concepts in Calculus.

By participating in this project the students were able to incorporate information they have learned in the classroom of Environmental Science into a real-life situation that will cause a real effect in the Mitchell Community. Working on the project the students learned what it takes to incorporate a sustainable energy source for a large building and therefore reducing the amount of carbon dioxide emissions that go into the atmosphere.

“We are extremely happy that you gave us the opportunity, it has allowed us to learn so much and we have talked about this during our meetings. We are so excited to be part of this project,” said one student following the presentation to the school board.

The students thanked their teachers Mr. Noah Kern and Robyn Embry for guiding through this large project.

Mitchell School board members thanked them for helping them with the decision on the project. Superintendent Dr. Brent Comer added that he will keep them informed on how this turns out as some of the presenters will be graduating before the project is complete.