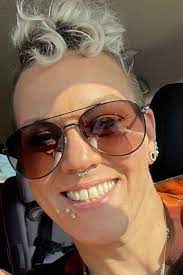 CLAY CO. – A missing Terre Haute woman was found dead after what officials initially thought was a hit and run accident on State Road 59 in Clay County.

Officials say 36-year-old Jessica Nascimbene was found dead inside of her vehicle which was recovered in a lake near State Road 59.

On April 30, the Clay County Sheriff’s Office was notified that a vehicle had struck the Indiana Sheriff’s Youth Ranch sign on State Road 59 and fled the scene.

Police say the vehicle crossed the center line at some point, went off the east side of the road, where it hit the Sheriff’s Youth Ranch sign, and drove through a ditch for a short distance. Police said there were no marks that showed where the vehicle went back to the road.

Using cell phone records, police learned Nascimbene’s last known location was in Clay County on State Road 59 between County Road 500 North and 600 North. Officers returned to the area to search for Nascimbene. They discovered her vehicle had went down a deep ravine and was located under 5 to 10 feet of water.

“We’re not sure at this time why she left the roadway,” said Sheriff Josh Clarke. “We assume the crash happened in the early morning hours. So, we’re not sure if she fell asleep or suffered a medical condition.”

After a truck towed the vehicle out of the water, detectives found the victim, later identified as Nacimbene, still inside. Officials say Nascimbene died due to the crash, but it’s unclear why she left the road.