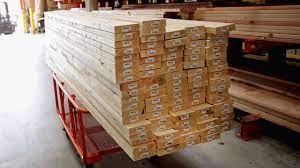 UNDATED – Lumber production is taking the latest economic hit caused by the COVID-19 pandemic. While wood production is at a 13-year high, the cost of lumber remains at record levels.

The demand for lumber has increased significantly past suppliers’ ability to keep up, leading to a shortage of lumber and housing, according to several reports.

According to the National Association of Home Builders, the shortage has resulted in a 250 percent increase in framing lumber costs. Typical prices for 1,000 board feet of lumber sit around $200 to $400. Now, prices are well above $1,000.

A for 3/4-inch plywood sheet, one of the most used pieces of common lumber for construction has raised 252 percent since March 2020. One 3/4-in x 4-ft x 8-ft Pine Plywood Sheathing cost more than $90 and even higher in some locations in April.

Shawn Church, editor of Random Lengths, which publishes price data on the wood products industry, gave us figures for 23/32-inch plywood produced in the Pacific Northwest and the South.

The NAHBreports that this bump in cost has pushed the price of an average new single-family home up by $35,872 over the past twelve months.

Why hasn’t the surge in wood production translated into lower lumber costs? It comes down to scarce inventory. While production has ramped back up, the demand from builders and home remodelers continues to outpace supply. That supply still hasn’t caught up from the state issued shutdowns which halted production last year.

This lumber price hike has also added nearly $13,000 to the market value of an average new multifamily home, which translates into households paying $119 a month more to rent a new apartment. Further adding to housing affordability woes, other building material prices have been steadily rising since 2020 and, like lumber, are in short supply as well.

The softwood products considered include lumber of various dimensions (including any that may be appearance grade or pressure treated for outdoor use), plywood, OSB, particleboard, fiberboard, shakes, and shingles-in short, any of the products sold by U.S. sawmills.

Now, builders are relying on donors for solutions and calling on President Biden to implement assistance by temporarily removing the 9 percent tariff on Canadian lumber.

Robert Dietz, the chief economist at the NAHB, says that homebuilders have absorbed some of these additional costs, however, will pass more of it onto buyers this year. While Dietz doesn’t foresee lumber prices going much higher, he thinks they’ll remain elevated throughout this year.