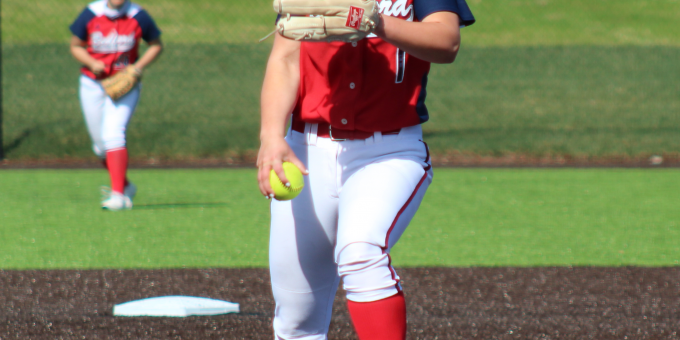 MONTGOMERY – Annie Waggoner dominated and cashed in from both crucial locations of softball real estate – in the circle and at the plate – while powering Bedford North Lawrence to an impressive road victory.

BNL’s precocious hurler slammed two home runs to ignite the offense, and she shut down Barr-Reeve with a career-high 14 strikeouts as the Class 4A No.6 Stars overpowered the Vikings 7-1 on Monday.

Waggoner (14-1 as her ERA dipped to 1.81) allowed only four hits and no earned runs with her fourth complete game of the year, and she matched her best strikeout total (14 against Loogootee in the season opener). As good as she was in the circle, she was an equal force in the batter’s box with 3 hits and 3 RBIs.

Her pitching performance was one of her best. She didn’t allow a walk and blew away the Vikings (11-8 and ranked No.11 in Class A) with a wicked curve ball that snapped sharp and snapped Barr-Reeve’s bats in half.

”The ball curved so much, and I think the dirt helped,” said Waggoner, who plays all her home games on the new turf field. “I was able to hold on to the ball better. If you’re sweating, you just reach down and grab some dirt. And I have worked on placement. My whole life, I’ve been told to throw strikes, and teams knew I wouldn’t walk them and started to dig in.”

“She was hitting her spots really well,” BNL coach Brad Gilbert said. “She moved the ball around a lot. They couldn’t catch up with it. She had good velocity, as fast as we’ve ever clocked her. She was feeling loose and pitched well. She had them baffled.”

The Stars (21-2) got off to a slow start against Barr-Reeve hurler Karlye Graber until Waggoner led off the fourth with a blast to left off the scoreboard. In the sixth, Sarah Stone started the frame with a single and Waggoner followed with her second bomb (her 7th of the season) for a 3-0 lead. Waggoner, who took pitching lessons with Graber, might have had some inside knowledge.

”She threw a curve ball that didn’t curve,” Waggoner said. “It was a good feeling overall. You always want to help yourself on the mound, take the pressure off yourself and the team, and hitting is contagious.”

BNL wrapped up its fifth straight win with four runs in the seventh. Lauryn Anderson opened with a popped double to right, and Carlee Kern ripped a triple off the fence to center. After Stone lofted a sacrifice fly for 5-0 advantage, Waggoner singled and Brynlea Bennett crushed a home run to left.

“Any time you score, it was one of those where everyone took a deep breath,” Gilbert said. “When you can extend the lead, it takes the pressure off.”

Barr-Reeve scored in the seventh when Emma Davis reached second on an error. Pinch runner Ava Carter took third on a wild pitch and scampered home on a ground out.

“It was a good quality win for us,” Gilbert said. “It’s the type of game we needed getting ready for Seymour. It took us a while to get to her, but we finally did.”