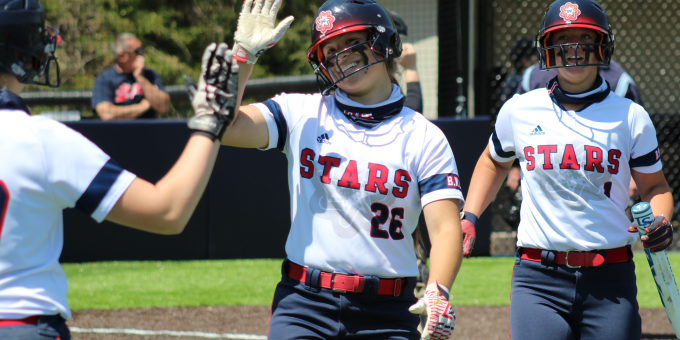 BEDFORD – This game was circled, probably in red ink. Unusual because Corydon is neither a conference foe or natural rival. Yet the Panthers, as their record and talent indicated, had Brad Gilbert’s complete attention.

Bedford North Lawrence took the clash seriously, although some goofy game plays sparked some smiles and laughter. In the end, with clutch hitting from the middle of the lineup and anther quality start by Aliza Jewell, BNL had the last laugh.

Brynlea Bennett drove in four runs with a pair of doubles, and Jewell went 6 2/3 innings in the circle to earn a quality win as the Stars conquered the Panthers 7-3 on Saturday. BNL won its 20th game of the season and extended its winning streak to four in a row.

BNL (20-2) never trailed, and the Stars took control with a 3-run third inning that was pivotal. Corydon flexed the power with two home runs, but BNL countered with two insurance runs on Braxton McCauley’s opposite-field double in the fourth.

“We tell the kids it doesn’t matter who is in the other dugout, but that’s one I knew we’d have to be ready,” Gilbert said. “We had to bring our A game.”

The Stars struck in the first. Carlee Kern walked, Annie Waggoner singled, and Bennett chased both runners home with a soft two-out double to center.

Corydon, playing only its second game on turf all year, got one back with Isabella Gerlach’s towering home run to center in the third. BNL came back with three. Sarah Stone started the rally with a walk, bounced her way to third with stolen bases, and scored when Waggoner’s fly ball to right was misplayed. After McCauley walked, Bennett cracked a double over the center fielder’s head for a 5-1 lead.

McCauley’s laser to the fence in left, after Stone doubled and Waggoner was hit by a pitch, with two outs gave BNL a 7-1 lead in the fifth.

Corydon (15-5 and ranked No.21 in Class 3A) stayed within striking range with Avery Adams’ two-run blast in the sixth. The Panthers threatened in the seventh, getting two runners on. Waggoner took over in the circle and recorded the final out when Grace Erwin’s line drive hit a runner.

“Against a quality team, Aliza pitched great,” Gilbert said. “She hit her spots. When you throw hard, the pitcher has to be perfect, and you take it for granted, so only missed two pitches and they hit home runs. Two pitches out of 95, we’ll take that.”

BNL was limited to seven hits. Waggoner, McCauley and Bennett had two each.

“We weren’t being too aggressive with the pitching, trying to make them hit our pitches the best we could,” Corydon coach Kevin Oskin said. “We were able to do that with off speed and moving the ball inside and outside.

“We learned we could battle with the top teams in the state. We never gave up. We had a couple of errors, the third inning cost us three runs, and it kind of spiraled and got away from us.”

BNL will visit Seymour and look to win the outright Hoosier Hills Conference title on Tuesday.