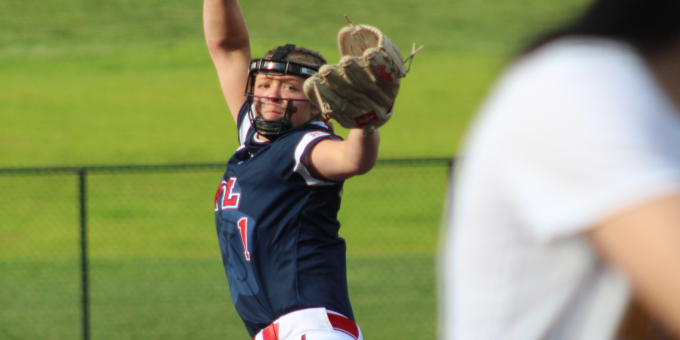 BEDFORD – Boom! When Sarah Stone makes solid contact, when the ball rockets off that composite bat with a scream of pain, there’s no doubt of the destination. Wham! When Carsyn Alvey connects, that yellow ball changes color, turning black from the bruise.

BNL’s offensive eruption overshadowed a pitching jewel by Annie Waggoner and some defensive web gems by those behind her. The Stars, after a slow start of single runs in the first four frames, exploded to double digits for the 10th time this season. North (5-10) just couldn’t withstand that kind of power and pressure.

The Cougars held on with claws, limiting BNL’s attack to minimum damage and staying within striking range as Natalie Burns ripped a home run to left in the fourth. BNL’s lead at that point was a nervous 3-1 edge.

Relax, chill, they’ve got this.

After Stone’s sacrifice fly in the fourth resorted the three-run lead, the Stars went to work the next inning. Brynlea Bennett laced a double to right-center, Haley Deckard ripped an infield single to short, and Aliza Jewell followed with a soft single to right to drive in a run.

With two out, Maddie Bennett drew a pinch-hit walk to load the bases, Carlee Kern smacked an infield single. That set up Stone, who has been pitched around or intentionally walked on a regular basis, with respect to her tremendous power. But this time, with nowhere to put her, North hurler Emma Isenhour had to offer something hittable.

The first strike she saw, Stone blasted, a towering bomb to center. It was her 15th of the season, yet her first in four games. It’s hard to say that a hitter with a .673 average is in a slump, but Stone could breathe a little easier when that ball disappeared.

“It’s been a while,” she said. “That one felt really nice. I’ve been more jerky with my swing lately, so to go up there and just trust my hands was very important. I was excited I got the opportunity.”

Relax, chill, Alvey’s got this.

With two out in the sixth, Jewell singled to left. Alvey, who admits to self-applied pressure, relaxed and sent everyone home with a drive to center. Her second homer of the season, and first-ever walk-off, was the perfect punctuation mark.

“Carsyn is right there, on the verge of doing that a lot,” Gilbert said. “She’s the typical high school kid that sometimes gets in her own way. If we can just relax, see the ball and hit the ball, she has a lot of power. It’s exciting to see. We’re not trading her.”

“It feels like an accomplishment, because I work so hard in practice and put so much pressure on myself in game,” Alvey said with a smile. “I just try to relax. Do I ever relax? It’s hard. Sometimes it’s difficult.”

BNL’s early runs came courtesy of Braxton McCauley (sacrifice fly in the first), a North error in the second, and Jewell’s RBI single in the third.

While the bats roared with 14 hits, Waggoner (13-1) was a silencer. She struck out seven and allowed only four hits. Her defensive support was exceptional as Kern made a tough bare-hand play at shortstop to gun down a runner, Lauryn Anderson made a smother stop of a shorthop for an out at second, and McCauley made a beautiful catch of a sinking liner in center.

“We pitched well, we played really good defense,” Gilbert said. “We scored every inning. You can’t be upset with that. The good news is we’re 19-2.”

BNL will host Corydon at noon on Saturday.