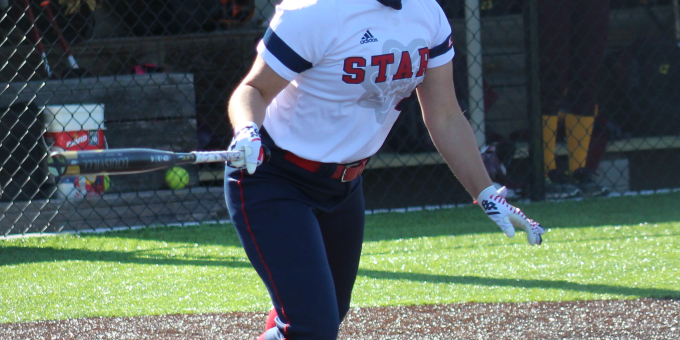 The No.8 Stars (18-2 overall, 6-0 in the league) claimed a piece of their first conference crown since 1998. Sarah Stone drove in 4 runs while Braxton McCauley and Haley Deckard added 3 RBIs each. BNL can win the outright championship with a win at Seymour on Tuesday.

Jennings County (8-12, 4-2) could not withstand BNL’s relentless offensive attack. The Stars took control with a six-run fourth inning and scored in double figures for the ninth time this season.

“That’s exciting to see, just keep scoring runs,” Gilbert said. “It was a great effort, and we’re excited to see the offense come alive. It was timely hitting, finding a spot and hitting it hard. The kids did a good job.”

BNL got started with a three-run first inning, with Annie Waggoner (RBI single) and McCauley (sacrifice fly) doing the damage. The Panthers answered with two runs in the first (Abby McDonald and Averi Zamora with RBIs) and pulled even with a run in the second.

From that point, BNL dominated. McCauley had a two-run single in the third, and the Stars erupted in the fourth. Carsyn Alvey started the rally with a run-scoring single, Stone added a sacrifice fly, Brynlea Bennett chased home a run while reaching on an error, and Deckard cleaned the bases with a hard single to right-center, powering BNL to an 11-3 advantage.

“I felt like we hit the ball hard,” Gilbert said. “A lot of line drives and hard ground balls, I feel good about the way we hit. We knew they would hit and put the ball in play, so I’m really exited to put a large number on the board. We had not done that in a while.”

BNL kept up the attack. After loading the bases, Stone and Waggoner had back-to-back sacrifice flies for a 13-3 lead in the fifth. The Stars scored four more in the sixth (RBI single by Aliza Jewell, a sacrifice fly by Carlee Kern and a two-run single from Stone).

Jennings pounded out 12 hits. Lidia Hall was 3-for-3 and Tori Lee blasted a home run. Jewell (6-1) earned the win, striking out 6 while surrendering 11 hits and one earned run.

The Stars will host Bloomington North on Friday.