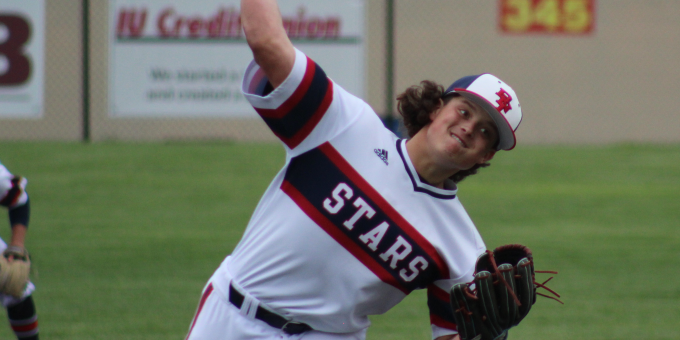 BEDFORD – After an all-or-nothing loss, Bedford North Lawrence bounced back with a lot of everything.

The Stars, who launched three solo home runs but got little else accomplished on Tuesday, blistered the baseball all over BNL Field while routing Trinity Lutheran 12-2 in five innings on Thursday afternoon.

BNL (14-4) cranked out 14 hits, most of them loud and wicked line drives (including Grant Dalton’s blast over the fence in center). Quite a contrast from the last outing. It brings to mind the famous Bull Durham quote:

But not enough to dampen BNL’s offense. The Stars scored multiple runs in every inning.

“We did a good job,” BNL coach Jeff Callahan said. “We had some good approaches early in the game. It’s always good to score early and keep adding on. It was a good night at the plate.”

BNL got started with two runs in the first. Evan Waggoner crunched a RBI double to right and Cole Karr followed with a run-scoring single to chase home pinch-runner Ryker Hughes.

In the second, the Stars loaded the bases with Braydon Brown’s hard single, Kline Woodward got grazed by a pitch, and Konley Woodward reached on a perfect bunt. Aden Pemberton hammered a two-run double and Waggoner added a double for a 6-1 advantage.

BNL scored three in the third. Dalton led off with his bomb and the Stars fashioned a two-out rally with a double by Konley Woodward and a RBI single by Colton Brown. Braydon Brown cranked a two-run double and Kline Woodward added a RBI double to cap the scoring in the fourth and trigger the mercy rule.

“I think we were more ready to play. We were focused,” Woodward said. “I think I’m staying more relaxed at the plate. I’m not trying to do too much.”

Lawson Woods had two hits for the Cougars (8-8). Kline Woodward was on top of his game, inducing six 1-3 putouts with taps back to the mound. That was indicative of the stuff he had as he improved to 5-0 and lowered his ERA to 1.52.

“He’s very athletic. He has good feet, he can move,” Callahan said of the freshman hurler. “He had some good stuff and fooled some, had them out in front. He’ll have to continue to get better and better as we continue. It’ll be interesting to see when he gets the call against a top-of-the-line team. And that’s coming in the near future.”

The Stars will visit Mitchell for the county-rivalry clash on Friday, then welcome University for a doubleheader on Saturday.