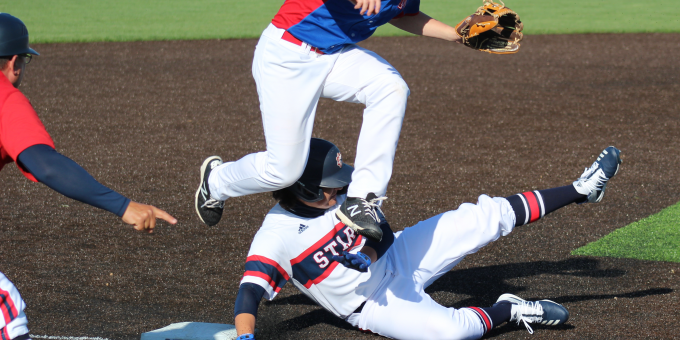 BEDFORD – Bedford North Lawrence proved, once again, there are multiple ways to win a baseball game.

Superior offense? Check. The Stars exploded for 11 first-inning runs in Game 1 of the doubleheader with Martinsville. Dominant pitching and a clutch hit? Check. Ryker Hughes and Braydon Brown were the heroes as BNL completed the sweep.

BNL broomed the Artesians, stomping to a 14-4, five-inning victory in the opener, then squeezing out sixth-inning runs for a 2-0 triumph in the nightcap. The Stars (12-3) surged to their fourth consecutive victory. Blowout or battle, BNL figured it out.

”I’m glad we played two,” BNL coach Jeff Callahan said. “The first game, we got through it, we won, but we played a little sloppy at times. In game 2, we saw some guys that are Jeffersonville-, Floyd Central-type pitchers. If we’re going to be in tough games like that, we have to make pitches and make plays.”

In the second game, BNL came through with two runs in the bottom of the sixth. Cole Karr walked and went to second as Grant Dalton grounded out. Brown cracked a RBI double to right-center to chase home Karr, and pinch runner Maddox Ray later scored on a wild pitch.

“The first pitch I saw a curve ball,” Brown said. “I’m not going to swing at a first-pitch curve when I’m trying to drive in a run. The second I got a fastball and just inside-outed it.”

“That was a big hit for Braydon,” Callahan said. “He had a good approach. And that second run was huge. That’s a big mental thing.”

Hughes pitched a complete-game gem, allowing only four hits and striking out four. Matthew Decker had two hits for the Artesians (5-9-1). Brown and Evan Waggoner had two hits each for the Stars.

“We all knew we didn’t play our best baseball in the first game,” Brown said. “In the second game we were better all the way around. Ryker pitched a great game.”

BNL’s big inning was the obvious story of the opener. After Martinsville took advantage of BNL’s shaky start, with two walks and an error paving the way for the three-run beginning, the Stars answered emphatically.

Karr lit the fuse with a two-run double, Konley Woodward laced a RBI single to right, Waggoner and Whitt Callahan followed with run-scoring singles, and Karr added a sacrifice fly during his second trip to the plate in that frame.

“I didn’t expect that,” Callahan said. “After we gave up three, you hope you come back and at least get on the board. I didn’t expect 11 runs. It’s always nice to answer a 3-spot with 11. We did enough to separate.”

Brown added a two-run single in the fourth, and Dalton capped the scoring with a sacrifice fly to end the contest by mercy rule in the fifth.