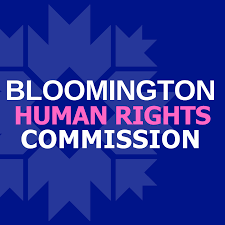 BLOOMINGTON – The Bloomington Human Rights Commission (BHRC) is seeking nominations for its 2021 Human Rights Award, recognizing an individual or group that has made specific, significant contributions to improving civil rights, human relations, or civility in our community.

Nomination forms are available here.  The deadline for nominations has been extended to Friday, May 28 at 5 p.m.

The recipient(s) of the BHRC’s Human Rights Award will be honored at a public ceremony.

“In Bloomington, the City’s ongoing work to protect and uphold human rights is supported and amplified by the many individuals, businesses, and nonprofits also dedicated to this goal,” said Mayor John Hamilton.  “We are proud to recognize these tireless, principled, and passionate residents and organizations, whose daily work does so much to lift up lives and increase equity – even as we acknowledge that there is much work still to be done.”

“While Bloomington continues to be a beacon of light in the State of Indiana, we know there is a long road ahead in order to become a more just community,” said BHRC chair Ryne Shadday.  “Although we have earned hard-fought victories in race relations, LGBTQ+ issues, women’s rights, and many others, the time we live in is ever more reason to get our hands dirty and continue making Bloomington the best city in the state for everyone.  We are proud of those who have long served our community and wish to reward those who have made such an impact in Bloomington, the state, and our nation.”

Bloomington’s human rights record has received national recognition.  For the last six years, Bloomington has been awarded a perfect score by the Human Rights Campaign on its Municipal Equality Index (MEI), the only city in Indiana to do so. The index evaluates how well a city supports the LGBTQ+ people who live and work there through its laws, policies and services.

The mission of the BHRC is to protect human rights in Bloomington.  The HRC is designed to enforce Bloomington’s Human Rights Ordinance in a fair and timely manner, to educate community members about their rights and responsibilities under various civil rights laws, to raise awareness on all human rights issues, to ensure that contractors and subcontractors on city jobs pay employees applicable common wages, to ensure that the City, as an employer, governmental entity and provider of public accommodations, complies with the Americans with Disabilities Act (ADA), and to provide the community with information about the ADA.

More information about the BHRC is available here.  Nomination forms for the Human Rights Award are available at the website or from the Bloomington Human Rights Commission or call 812-349-3429.