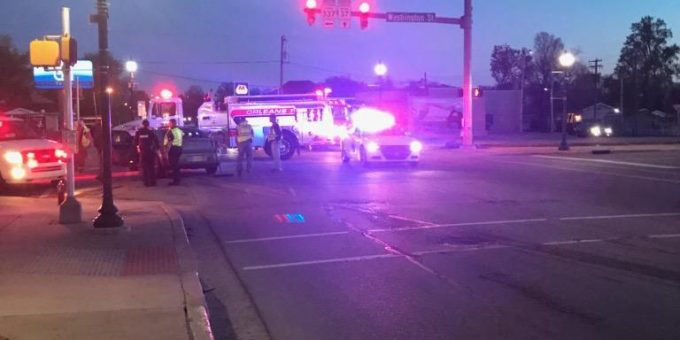 ORLEANS – Two people were injured Sunday night in a two-vehicle accident on State Road 37 at Monroe Street in Orleans.

When Orleans Police arrived they found a 2019 Jeep Cherokee, driven by 35-year-old Johnathon Heyder, of Orleans, in the parking lot of Super Clean Car Wash. The vehicle had extensive rear end damage.

The other vehicle, a 2007 Chrysler 300 M, driven by 31-year-old Matthew Southworth, of Shelbyville, was found approximately two blocks away from the intersection of State Road 37 and State Road 337. Police say the vehicle had significant damage to the front end.

Both drivers were injured.

Southworth complained of knee and leg pain. Heyder complained of severe lower back pain. Samantha Heyder, a passenger in Heyder’s vehicle, was also transported to IU Health Paoli for a medical evaluation and released.

Southworth told police his stepbrother was driving the vehicle as a designated driver. He then told police he was going home to Bedford and didn’t remember what had happened. He just remembers waking up in the hospital.

Heyder told police he was traveling around 30 miles per hour in front of Wheat’s on State Road 37 when he and his wife were “violently rear ended”.

Heyder told police the collision “sounded like a bomb had gone off”. He said his vehicle “flew through the air sideways hitting a light pole and sign”. The vehicle came to a stop in the car wash parking lot.

Heyder told police “he and his wife were in shock and they never saw it coming”.

Samantha Heyder, a passenger in Heyden’s vehicle, told police she was talking to her husband who was driving, and “out of nowhere” their vehicle was hit in the rear.

She told police their vehicle went airborne, hit a lamp post and landed in the car wash parking lot.

Witnesses told police both drivers were traveling south on State Road 37 when they saw “a large cloud of smoke appear” and the two-vehicle collided.

Other vehicles swerved to avoid a collision with Southworth’s vehicle.

One witness told police Southworth’s vehicle was smoking and she and her partner put out the fire with a fire extinguisher.

The witness told police she noticed an empty Fireball whisky bottle in the cup holder of Southworth’s vehicle.

Another driver told police he was traveling north on State Road 37 and heard the crash and turned onto a side street to miss the sliding vehicles and flying debris.

Police say after the collision, Heyder’s Jeep traveled 75 feet from the point of impact. The vehicle then left the roadway and traveled another 110 feet where it came to a stop in the parking lot.