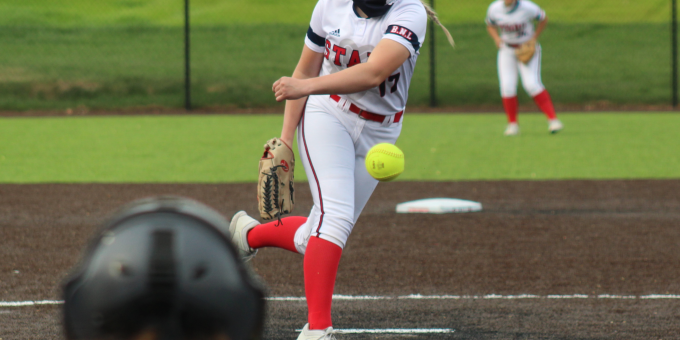 BEDFORD – Braxton McCauley, her swing sweet and explosive, finally got a pitch in her wheelhouse. And she pounced, like a jungle cat springing on prey.

Bedford North Lawrence, kept off balance at the plate by wild but effective Madison hurlers, didn’t hit many balls hard. But the last one sure was. McCauley’s three-run, walk-off blast finished off Tuesday afternoon’s 10-0, six-inning victory for the Stars, who took another step toward the Hoosier Hills Conference title.

The No.6 Stars, offensive juggernauts when the bats snap, crackle and pop, got a bit soggy with only seven hits. They also drew eight walks and used their aggression as a weapon, the reason they scored double-digit runs for the eighth time this season.

Then McCauley connected, smashing her home run – BNL’s only extra-base hit – to center and powering BNL (15-1) to its fourth league win. Three more for the first HHC crown since 1998.

“We have to take them one at a time and play them all out,” BNL coach Brad Gilbert said. “As they show up, we have to be ready to go. We’re too close now not to play well.”

The Cubs (7-11, 1-3 in the league) kept the Stars bottled up, despite issuing all those walks. Madison starter Kallie Eder allowed only four hits in three innings, and reliever Immi Mann worked two scoreless innings – until the final frame.

Annie Waggoner led off the sixth with a single to center, and Brynlea Bennett reached on an error. On the next pitch, McCauley hammered her fourth homer of the season (and BNL’s 31st as a team).

“I was just looking for my pitch in my zone, and it was right there,” McCauley said. “And it just went out. I was just waiting for the ball, and it happened.”

BNL got two runs in the first with only one hit – Lauryn Anderson’s lead-off bunt. A walk, two ground outs and a wild pitch later, the Stars were on the board. The Stars added four in the second, with three walks loading the bases. Sarah Stone reached on an error and Waggoner plated two with a single to center. McCauley followed with a RBI single for a 6-0 lead.

“We didn’t hit a bunch of balls hard, but you have to hit it in the right spot,” BNL coach Brad Gilbert said. “There are nights like that. We scored, but we left a few runners out there. Some nights you don’t quite catch it. And being effectively wild can be a good thing, it works. Our kids just did what they needed to do to get the job done.”

BNL added a run in the third, then went silent for the next three innings. McCauley broke the sound of silence.

“It was nice to see her get a pitch she liked,” Gilbert said. “It’s great to have her back.”

On the flip side, BNL pitchers Aliza Jewell and Waggoner were dominant. Jewell allowed only two hits – a two-out double to left-center in the first and a two-out single in the second. Waggoner fanned six in her three innings of relief.

“They both pitched well,” Gilbert said. “We made some nice plays, our defense played well.”