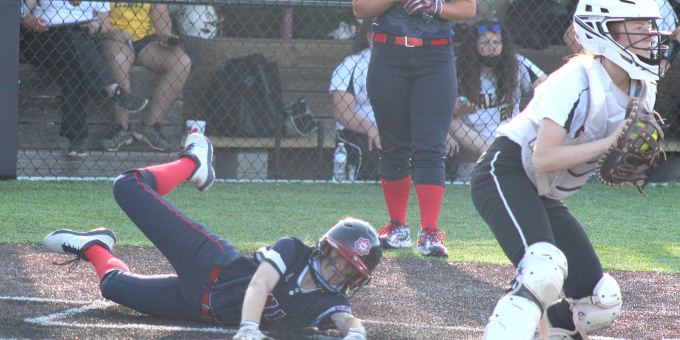 BEDFORD – After a flat start, perhaps a little mentally hung over from a huge weekend victory and a newly-minted No.6 ranking, Bedford North Lawrence shifted into steamroll mode.

The Stars warmed to the task, shaking off sluggishness to smack down Salem 14-5 on Monday afternoon. Sarah Stone and Annie Waggoner hammered back-to-back home runs to kickstart the heart of the offense, and Aliza Jewell muzzled the Lions with two perfect relief innings in the circle.

BNL (14-1) was not as crisp as previous outings. Blame it on the afterglow of the road victory over Floyd Central and the inevitable looking ahead to a busy week of conference clashes and an Ohio road trip. Focus might have been a little fuzzy, and Salem (4-6) scuffed up BNL starter Annie Waggoner during two scoring frames.

But the Stars were never in danger. Waggoner and Brynlea Bennett had three hits each, Haley Deckard drove in three runs, and the beat goes on.

“Another win,” BNL coach Brad Gilbert said. “I thought we warmed up a little mediocre and in the first inning we were a little flat in everything. We talk about playing no matter who is in the other dugout. We finally relaxed a little bit, put some runs in the board.”

BNL scored twice in the second. After loading the bases with no outs, Alivia Davis drove in a run with a ground out and Bri Foddrill followed with a single to center.

The Stars were in four-score form after that, scoring four times in each of the next three innings.

In the third, Stone led off with a blast to left (her 13th of the season) and Waggoner launched another. Brylee Blackwell added a RBI double later in the frame.

“We need to do a better job of adjusting to who is in the circle,” Gilbert said. “We shouldn’t care who it is, we have to figure it out and make adjustments. We did that after the first time through the order.”

Salem countered with three runs in the fourth (Hailey Timberlake with a RBI double and Natalie Blevins with a run-scoring single) and two more in the fifth (Timberlake clubbed a two-run homer to center).

“We scored some runs, against good pitching,” Salem coach Rodney Brough said. “They have some big hitters. We competed, hung around and played them tough.”

BNL will face Madison in a key Hoosier Hills Conference battle on Tuesday.