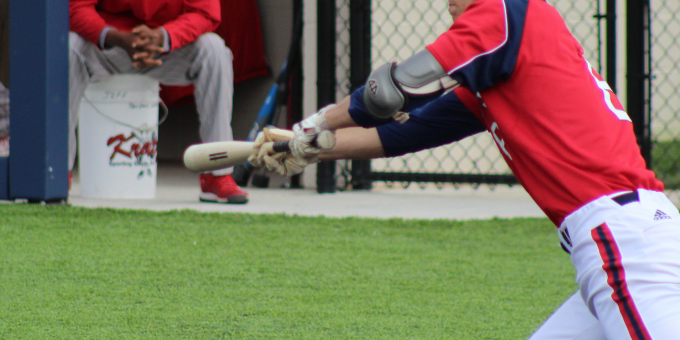 McEwen hurled a spectacular one-hitter, allowing only a bunt single to BNL’s first batter, as the Red Devils silenced the Stars 3-0 on Friday evening. The Devils (8-6) didn’t do much damage to BNL starter Braydon Brown, but McEwen’s near-perfect performance – 10 strikeouts and no base runners after Colton Brown’s slick bunt – meant anything on the scoreboard was enough.

The Devils got a run in the first on a sacrifice fly and two more in the third on a soft double into the right-center field gap that glanced off the glove of Colton Brown as he made a diving attempt. Jeffersonville finished with 10 hits.

But that was the by-the-way highlights. The story was McEwen, the Indiana State recruit with the 85-plus fastball. He was throwing smoke, and the Stars couldn’t connect on the vapor trails. He threw 91 pitches, 65 for strikes.

“That was probably the best pitching performance we’ve since Chandler Dale threw a perfect game (against Jennings County in 2014),” Jeffersonville coach Derek Ellis said. “That tells me he’s pounding the zone, going right at them, challenging them. That’s what we expect, that’s the kind of performance we’re looking for.

“They put some good swings on pitches. Max was just really good.”

Brown’s bunt single created BNL’s only scoring chance. He stole second and scampered to third on a wild pitch, then got stranded as McEwen fanned Evan Waggoner and got Whitt Callahan on a liner to center. The next 18 outs were quiet, with few hard-hit chances.

“You don’t go into a game thinking you’re only going to get one base runner,” BNL coach Jeff Callahan said. “That’s all we got, and unfortunately we didn’t get him across.

“We just didn’t have any opportunities. That’s by far the best kid we’ve seen on the mound. You can see that velocity on the machine, but it’s different in a game situation. He did a real nice job. He was throwing a lot of strikes, putting the pressure on us. He was able to throw what he wanted.”

Jeff’s early offense was key. The Devils loaded the bases in the first and settled for the lone run on Chate Amick’s short fly ball to right. They got the two runs in the third on Kannon Stull’s lead-off double, a hit batter, and Amick’s gap finder.

“Colton almost made a Sportcenter play,” Callahan said. “Baseball is a game of inches. It went off his glove. The next thing you know they have a couple of runs, and it was an uphill battle with that kid on the mound.”

“With this group, if we’re going 0s for a while, we’re inexperienced and I don’t know how they will respond to that,” Ellis said. “But if we get a couple of runs on the board, and Max is throwing, there’s more energy and pep.”

Braydon Brown suffered the loss, working 5 2/3 innings with 9 hits and 3 runs. Stull, McEwen and Alex Kelley had two hits each for the Devils.