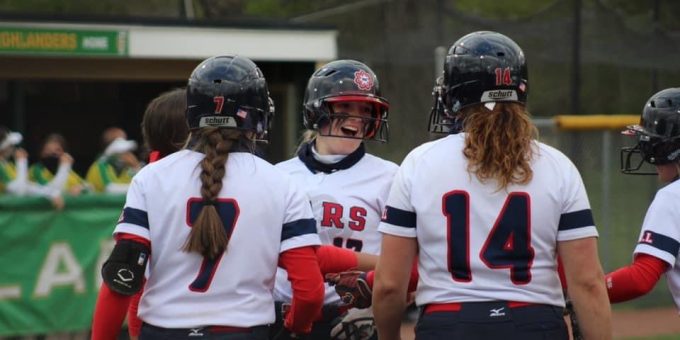 GALENA – Bedford North Lawrence polished off a Jewell of a win in a showdown for the Hoosier Hills Conference lead.

Aliza Jewell fired a complete game in the circle, and she launched a go-ahead home run in the fourth inning while propelling the No.7 Stars to an 8-3 victory at Floyd Central on Friday evening.

Sarah Stone clubbed a late three-run home run for huge insurance runs as BNL (13-1) improved to 3-0 atop the league. The Stars are chasing their first league title since 1998, so the value and importance of a road victory over the No.19 Highlanders (11-4, 4-1) cannot be overstated.

“Any time you come to Floyd and go home with a victory, you have to be happy,” BNL coach Brad Gilbert said. “I can’t say enough good things about Aliza. And when you play Floyd and get 15 hits, it’s a great night.”

BNL trailed 3-0 after surrendering all the runs in the second. Taylor Chumbley cranked a home run to right to start the rally. After a walk and double, the Highlanders pushed across two more on a bunt single and BNL error.

“When we got down, a lot of teams would fold,” Gilbert said. “But I never sensed any panic in the dugout. There was never a sense of ‘Oh no, what will happen next?’ It shows a lot about the character of this team, they know they’re never out of it.”

The Stars stormed back in the fourth. Braxton McCauley singled and Lauryn Anderson dropped a bunt single. Carsyn Alvey stroked a single to center for the first run, and Jewell jolted the next pitch deep to right.

“She got a pitch she liked,” Gilbert said.

BNL added another run in the fifth with Brynlea Bennett’s lead-off double and Anderson’s two-out single to right. Stone hammered down the final nail. After Jewell started the sixth with a single and Carlee Kern singled, Stone launched her 12th homer of the season.

”When you have two three-run home runs, it’s going to be a good night,” Gilbert said. “Sarah had apologized after hitting a double (in the fourth), she promised to be patient and wait for a better pitch. She said she wouldn’t miss the next time.

“She didn’t. And that might be the last time she sees anything close to the plate against Floyd.”

Jewell (3-0) hurled a gem, allowing only four hits while striking out 9. BNL also played solid defense, with a catch by McCauley at the fence and double play by Waggoner.

“She pitched well,” Gilbert said. “Other than that one inning, she settled down and got back to what we do well. She moved the ball well and kept them off stride.”

The Stars will host Salem on Monday.