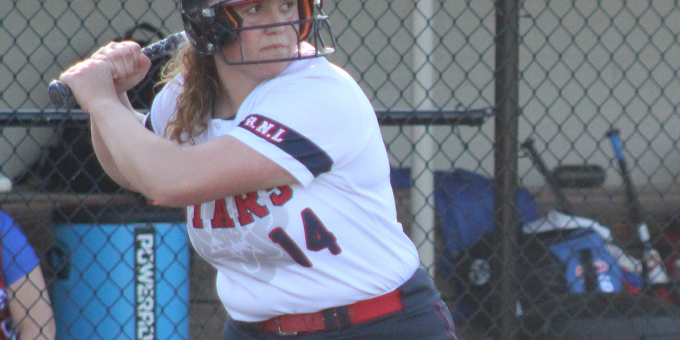 COLUMBUS – The long ball giveth, and the long ball took away Bedford North Lawrence’s perfect season in the championship game of the Columbus North Invitational on Saturday.

No.14 Brownsburg swatted three home runs, while pitcher Kelsey Endress kept the No.7 Stars in check as the Bulldogs powered to a 8-4 victory in the final. BNL (11-1) advanced to the title clash with earlier wins over Columbus North (7-6 with a late rally) and North Harrison (10-0 in five innings).

Brownsburg’s Grace Mendenhall, Maddy Edwards and Endress all slugged home runs to deck the Stars, who collected only one hit.

“It was a long day, and we got tired,” BNL coach Brad Gilbert said. “Three games in one day is a lot. And when we got the ball over the plate, they hit it. They were definitely a solid team. It was one of those nights where they played a little better than we did.”

The Bulldogs (7-1) struck early against BNL’s Annie Waggoner (9-1) as Endress ripped a 3-run blast in the first. BNL got a run back without a hit in the second with Braxton McCauley’s walk, Brynlea Bennett’s sacrifice bunt and Haley Deckard’s squeeze bunt, but Brownsburg answered immediately with the Edwards home run to lead off the second.

Lauryn Anderson started the third with a bunt single and later scored when Waggoner was hit by a pitch with the bases loaded. Bennett reached on a fielder’s choice to plate another run, but Endress struck out the next two batters to escape the jam with a 4-3 lead.

The Bulldogs got two more runs in the third on RBI singles by Vivianne Harris and Kaylee Larkin, and Mendenhall’s two-run blast in the fourth made it 8-3.

BNL got a final run in the seventh when Anderson reached on an error and later scored on Sarah Stone’s sacrifice fly.

Waggoner lasted only one-plus inning and allowed 4 runs and 4 hits. Aliza Jewell worked the final five innings and gave up four runs on 6 hits. Kiersten Huff, Harris and Olivia Calero all had two hits each for Brownsburg.

“She had a little speed, more than we’ve seen, and she moved the ball well,” Gilbert said. “We had some good at-bats that we just missed. But those are the find of games we need to be in.”

Brownsburg reached the final of the six-team tournament with wins over Seymour (5-2) and East Central (6-5, scoring twice in the seventh).

In the opener, BNL survived its first serious challenge of the season.

The Stars roared to a 3-0 lead, scoring twice in the second on McCauley’s double, bunts by Bennett and Deckard, and Jewell’s sacrifice fly. Stone crushed a homer over the scoreboard in the third.

The Bull Dogs (5-3) battled back to pull even. Maddi Rutan ripped a home run in the fourth, Lillian Mackey cracked a RBI double in the fifth, and Rutan blasted her second bomb in the sixth.

BNL exploded for four in the seventh, all with two outs. Carsyn Alvey started the rally with a lead-off single and Anderson bunted her to second. After Carlee Kern struck out, Stone was intentionally walked, and Waggoner was hit by a pitch to load the bases.

McCauley drew a walk on a full-count pitch to drive in the first run, and Bennett followed with a clutch double down the left-field line to clear the bases and give BNL a 7-3 advantage.

North almost erased that in the bottom of the frame, scoring three times with two out. Rutan doubled in a run and Bailey King lofted a two-run double to left before Waggoner got Alexia Heafner to foul out and end the threat.

Alvey had 2 hits for the Stars. Waggoner (9-0) went the distance and fanned 7. Rutan was 3 for 4 with 3 RBIs for North, which collected 10 hits. She also suffered the loss in the circle, despite striking out 13.

“Those are the games we need to play,” Gilbert said. “That’s the first time we had seen speed and a good change-up from a pitcher, and we had some really good at-bats late in the game. We learned and battled.

“We learned a lot about making adjustments and I was excited about the way we played. It was a good test, the first game that’s been close. No matter what we did, they answered the call.”

In the second game, Jewell fired a 3-hitter to shut down the Cougars (4-7). Stone slammed two more home runs and McCauley added one to ignite the offense.

“I feel pretty good about the whole weekend,” Gilbert said. “We have a lot to work on, but we didn’t quit. We have to play games like this to get better.”

BNL will return to action on Thursday against Jeffersonville.