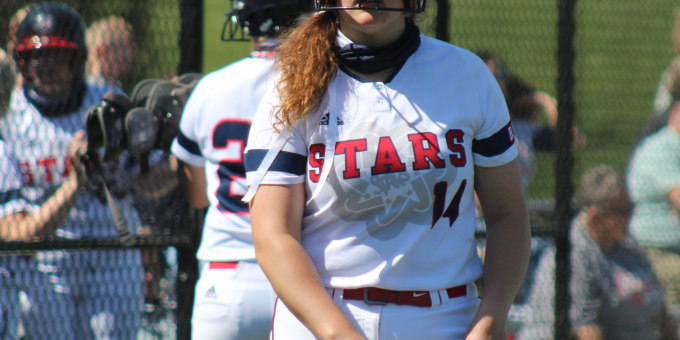 The No.7 Stars slammed five home runs, including a pinch-hit grand slam by Maddy Bennett, while overpowering New Albany 16-5 in five innings. BNL (9-0, 1-0 in the league) collected 10 hits, and half of them sailed out of New Albany’s new turf-infield park as the Stars posted a season high for runs scored.

Annie Waggoner, Sarah Stone, Brynlea Bennett and Braxton McCauley also blasted long balls as BNL raised its season total to 21 – one shy of the school team record set in 2019. That will likely be obliterated. The Stars have now had eight different players slug homers.

“Our kids came off the bus ready to go,” BNL coach Brad Gilbert said. “It was a lot of hard-hit balls. Even some of the outs were hard hit. I’m really proud of the kids for taking care of the first conference win and getting the job done.”

BNL got rolling with five runs in the first. Waggoner belted a two-run home run, McCauley followed with a solo shot, and Lauryn Anderson added a two-out, two-run single with the bases loaded.

New Albany answered with a two-run homer by Vanessa Burns in the bottom of the first, but the Stars exploded for seven in the third. Maddy Bennett had the big blow, her grand slam to left field that broke the game open and forced New Albany outfielders to play with their backs against the fence.

“I just had a gut feeling,” Gilbert said. ”Maddy had been hitting the ball well in practice. And that was a perfect opportunity. She got the barrel on it and she drove it out. It was nice to see her hit the ball hard, hopefully that will give her some confidence.

”It’s hard to come off the bench, but we’ve preached all year when your number is called, be ready. She stepped up.”

Stone added a two-run bomb and Brynlea Bennett ripped a solo homer during that explosive third inning. The Stars added four more in the fourth with a RBI single by Carlee Kern and a series of wild pitches.

Kern was the only BNL player with two hits, and she scored three times. Maddy Bennett finished with 4 RBIs while Waggoner, Stone and Anderson drove in two runs each.

Waggoner (8-0) earned the win in the circle, allowing three hits and one earned run in three innings. The Stars were guilty of 3 errors. Burns was 2 for 3 with 3 RBIs for the Bulldogs.

“It’s always nice to come to New Albany and get a win,” Gilbert said. “It makes the bus ride a little shorter and a little nicer. For the most part, we played well.”

BNL will compete in the Columbus North Invitational on Saturday, starting the three-game day against Columbus North at 8 a.m. The Stars will also face North Harrison (noon), then meet either East Central, Brownsburg or Seymour in the finale.