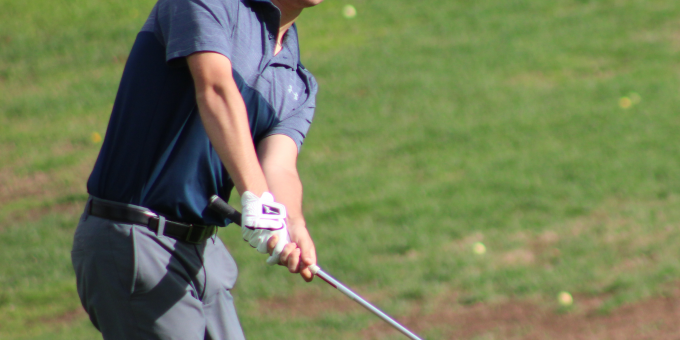 GALENA – Bedford North Lawrence’s Colten Girgis, playing his best under the worst of conditions, fired a sensational 1-over 73 to earn medalist honors in the Floyd Central Invitational on Saturday afternoon at Valley View.

Girgis, handling the rainy, windy weather with outstanding results, carded three birdies during his first-ever tour of the course. The left-hander powered the Stars to a fifth-place finish in a field that included four ranked teams.

Girgis was unphased by the competition and the weather. Once he tamed his driver, his low ball flight and course management helped him navigate and conquer.

“He had a grin on his face every time I saw him,” BNL coach Mike Wright said. “You could tell something was up. We didn’t talk about his scores, so I didn’t expect the final results.

“You have to go out there and do it under circumstances that are not ideal. And that was a loaded field. I’m so happy for him. It’s thrilling for us. Hopefully it gives us a shot in the arm, for what is possible.”

Girgis started on the ninth hole and promptly went to work with a 45-footer for birdie on the 10th. He added birdies on the par-5 16th and the short par-4 8th.

“I started off my putting drives in middle of fairway,” Girgis said. “Once I figured out my driver, I was getting on the greens and making putts.”

After posting a 79 during the home debut at Otis Park earlier this week, Girgis was surprised by his fantastic finish – especially when he started the day without an umbrella.

“I didn’t know what was in store, going out there without expectations, and I think that helped me.” Girgis said. “I’d love to be in the low 70s every time. I know I have lot of work to do to get consistent. But this is a nice temporary boost of confidence.”

Trevin Hutchinson fired 83, Ramzi Girgis added 91, while Jackson Jones and Dylan Endris capped the scoring for the Stars with 94s.

BNL will visit Washington next week.