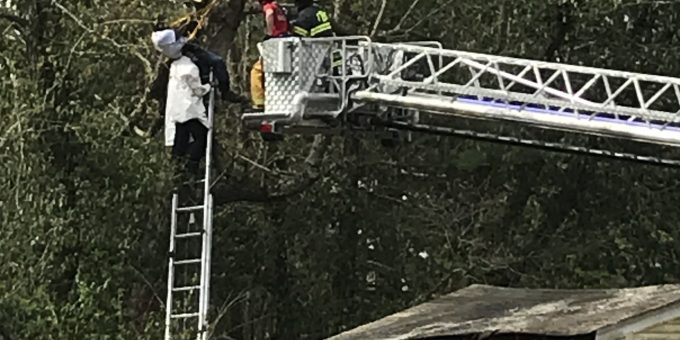 MONROE CO. – Around 10:30 a.m. Tuesday, were called to Holland Drive after a report of a possible injured person stuck in a tree.

When units arrived, they found a tree worker stuck approximately 35 feet in the air. The worker had been pinned by part of the tree he was cutting and could not free himself.

It took first responders more than an hour to free the man from the tree.

Duke Energy was contacted to disconnect the power while rescue workers used saws, ropes, and other equipment to accomplish the rescue.

The man who suffered a leg injury was transported by an IU Health Ambulance to a local hospital for treatment.

Around 11 a.m. fire units were called to West State Road 45 and State Road 445 in Greene County to assist with an overturned semi-trailer carrying more than 9000 gallons of propane.

According to fire personnel no propane was leaking from the tanker and wrecker crews were able to upright it safely.

State Road 45 was closed at the junction of State Road 445 for several hours.

At approximately 4:30 p.m., firefighters were called to State Road 446 and Allen’s Creek Road to extinguish a brush fire.

Units arrived to find no fire in the area.

Firefighters were able to call the person who called 911 and narrowed their search.

Firefighters located the fire on Gilmore Ridge on the Monroe/Brown County line in the Hoosier National Forest.

Once fire crews made it to the correct location, they found about two and a half acres of woodland burning.

The US Forest Service firefighters responded to the scene along with units from Lawrence County, Brown County Fire, and Nashville Fire Department.