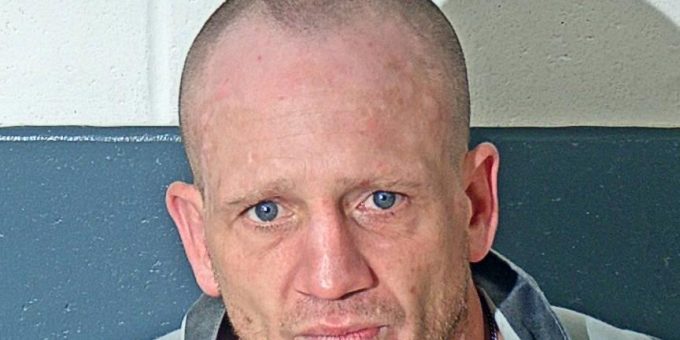 OOLITIC – A Newberry man was arrested Monday morning, after a Lawrence County Sheriff’s Department deputy received a call reporting a two-vehicle rear-end collision on State Road 37 at the Oolitic stoplight.

Police found the two vehicles in the parking lot of Hawkins Auto Mart in Oolitic.

Police learned one of the drivers was impaired.

Hasler told the officer it was there from the day before.

Hasler then picked up a can of Axe body spray and sprayed himself with it.

He was asked to do standardized field sobriety tests which he failed however, he did pass a breathalyzer test.

The officer then asked Hasler to perform a Abbott SoToxa test which tests drugs in a person’s saliva. He refused.

He was placed under arrest and transported to IU Health Hospital for a blood-draw.

While en route to the hospital, Hasler slumped down in the seat and appeared to have fallen asleep. He had to be physically helped from the vehicle and taken to the emergency room due to his impaired state.

Once the medical staff started tending to Hasler, he became combative, uncooperative  and belligerent. An IU Health Hospital officer had to hold Hasler down to prevent him from hitting those treating him.

Hasler fell back asleep and the hospital staff administered Narcan. The Narcan was effective and Hasler awoke.

He was medically cleared and had to be forcibly handcuffed and placed in a wheelchair because he refused to walk to the transport van.

At the van, Hasler was loud, disorderly and made racial slurs towards a detective. He stiffened his muscles and forcibly resisted  getting into the transport van. Once he was placed in the van Hasler spit his gum on the detective.

Officer then placed a spit hood on Hasler to keep him from spitting on anyone else.

At the jail, Hasler admitted to ingesting “Roxys” or Roxicodone, a prescribed opiate.