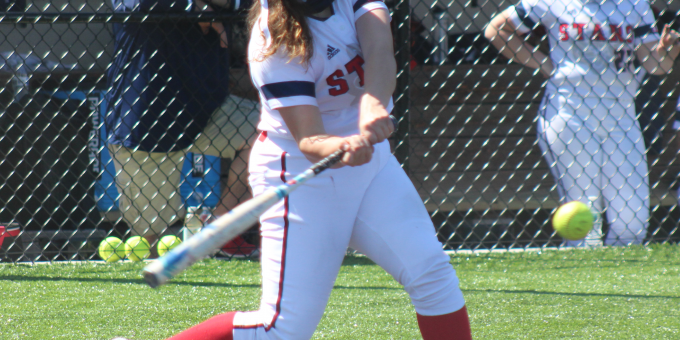 BEDFORD – Call them the Powerpuff Girls, these sluggers with super powers – except there’s no puff. Only stuff. Great stuff, with bat in hand and ball on the radar scope. Blip, blip, boom!

Bedford North Lawrence, crushing home runs and souls with each titanic blast, added to its launch total and its victims list with a pair of victories on Saturday. The Stars, momentarily ranked No.19 in Class 4A but sure to climb, shackled 3A No.11 Silver Creek 9-1 in the morning game of a three-team robin-round, then vanquished Vincennes Lincoln 12-0 in five innings during the finale.

The Stars banged three more homers in the opener, raising their season total to 13, while totaling 14 hits during the win over the Dragons. Lincoln managed to keep BNL on the inside of the fence – the first team to accomplish that this season – but could not keep the Stars contained as BNL roared to 6-0.

“Our kids are to starting to figure out, if we attack pitches we can handle, our success rate will go way up,” BNL coach Brad Gilbert said. “We don’t try to hit the ball hard, just let the ball get to us and put a good swing on it. The ball is carrying in this park right now. Next thing you know, it’s on the other side of the fence.”

Brynlea Bennett started the long-ball brigade in the opener, ripping her first of the season in the second. After pressing for success in the first week of the campaign, she relaxed.

“I said just have fun instead of trying so hard,” Bennett said. “It felt good to join the club.”

BNL scored three with two outs in the third as Annie Waggoner clubbed a RBI double and Sarah Stone followed with a two-run bomb – her fifth – for a 4-0 lead. The Dragons (2-1) got one back with a solo homer from Macy Ferrell in the fourth.

The Stars pulled away with a run in the fifth (Stone tripled and scored on an error) and four more in the sixth (Aliza Jewell’s lead-off homer, followed by a two-run double from Waggoner and a RBI double by Stone).

Stone was 3 for 4 with 3 RBIs, Bennett had 3 hits, and Waggoner drove in 3 runs. Waggoner (5-0) also went the distance in the circle, scattering 7 hits and striking out six.

In the second game, Jewell fired a jewel, allowing only three hits and fanning five for her first win of the season.

“She’s a lefty, and she’s so smooth, the ball just jumps out of her hand,” Gilbert said. “When she’s on, she’s hard to hit.”

BNL took control with six runs in the second against the Alices (1-4). Brylee Blackwell cranked a two-run double, Carlee Kern hammered a run-scoring single, Stone lofted a long sacrifice fly, and McCauley singled in a run during the rally.

The Stars added four more in the third, with the Alices struggling to track down fly balls on defense, and two more in the fourth to finish off the mercy-rule triumph. Gilbert went deep into his bench with little drop in production.

Stone and McCauley had two hits each against Lincoln hurler Delaney Anthis. Stone is now 15 for 19 this season with 12 RBIs.

“We learned just how strong our lineup really is,” Bennett said. “We all put good at-bats together, hit the ball and scored runs.”

”You have to give her credit for the way she threw,” Gilbert said. “She kept us off balance. Yet we can look at the scoreboard, and we didn’t hit as well as we normally do, and we still scored 12 runs. That’s a doggone good day.”

BNL also played error-free during the doubleheader and turned a sharp double play against the Alices.

“That’s what we try to emphasize, just make the routine plays,” Gilbert said. “If you don’t give extra outs and extra bases, that’s a recipe for success.”

The Stars will host Brownstown on Monday.