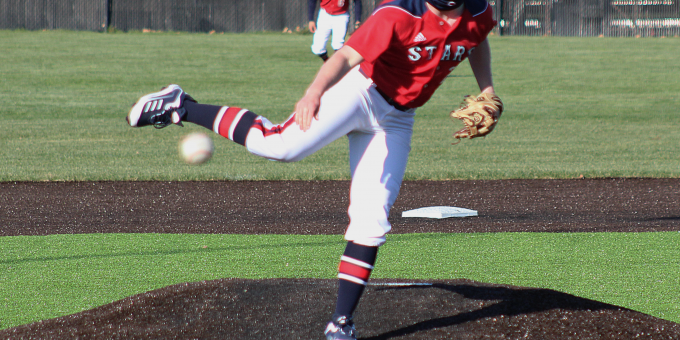 BEDFORD – Complete games – only 45 were recorded in 2019 – are a disappearing art in the major leagues, where the average number of pitches thrown is now 146 and the average length of games is now over three hours, rivaling Gone with the Wind for run time.

Karr, hurling an efficient masterpiece in the home opener, fired a one-hitter as the Stars whitewashed Whiteland 9-0 on Friday afternoon. He required only 71 pitches, and less than two hours, to break in BNL’s new turf infield in grand fashion.

After the pregame ceremony to dedicate the new-look facility, including a first pitch from former coach and athletic director Mike Short, Karr and the Stars (1-1) made short work of the Warriors.

High school pitchers are limited to a pitch count by IHSAA rules. Karr didn’t come close. He had only two strikeouts, surrendered a lead-off single in the fourth, and worked around two errors.

“You wouldn’t expect that the first week of the season,” BNL coach Jeff Callahan said. “But we’ve said all along we don’t have pitchers who will strike a lot of guys out. We have guys who pitch, who will be in the zone and pitch smart.

“When you throw strikes, you give yourself a chance. We have nine guys out there to play defense. He was very efficient.”

Karr’s pitch of choice, with veteran catcher Evan Waggoner making the decisions with his calls, was a snappy curve. Forget the heater, Kole, give ‘em the curve – although as the afternoon temperatures got a little chilly, a heater would have been welcome.

“I trusted my defense a lot,” Karr said. “My curve ball was working well, and they couldn’t get it in the air. It was kind of surprising he let me go that long. But it felt good all the way through.“

BNL took a 2-0 lead in the second with Karr’s lead-off walk, Grant Dalton’s single, Braydon Brown’s sacrifice fly and a Whiteland error. The Stars made it 3-0 in the third, and a two out rally – started by Karr’s double and capped by Brown’s single – pushed the lead to 4-0.

The Stars erupted for five runs in the sixth, all with two outs, as Karr singled in a run and two more Whitleland errors opened the floodgates.

“We did a lot of good things,” Callahan said. “The bottom of the order did a good job of putting the ball in play. We feel like we have guys who can put the ball in play and hit the ball hard, manufacture and score some runs.

BNL will play a split doubleheader on Saturday, hosting North Harrison at 11 a.m. and Eastern Pekin at 2 p.m.