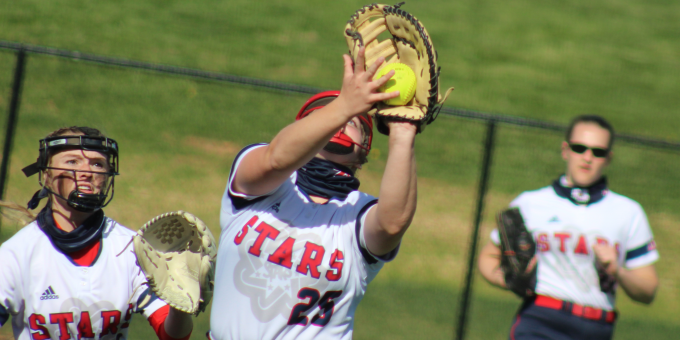 BEDFORD – Bedford North Lawrence’s version of an accidental tourist is a home run trot, a slugger touring the bases after a blast finds a landing spot on the other side of the outfield fence.

The Stars claim all the homers – now 10 of them after four victories – are accidents of circumstance. Intending to make solid contact and hit line drives, balls are flying out at a record pace. And they’ve only just begun.

Annie Waggoner and Aliza Jewell crushed home runs to highlight a 10-hit attack as the No.19 Stars poked Pike Central 9-5 on Friday afternoon. Waggoner also earned the win in the circle, striking out five in 4 2/3 innings of work, and Jewell finished it off. They allowed only 1 earned run.

Waggoner’s launch, her second of her sophomore season, was a two-run bomb that highlighted a four-run fourth, creating working space after the Chargers (2-2) scrambled within 3-2.

Both shots went over, in a hurry.

The Chargers took advantage of a BNL error and Karly Kavanaugh’s two-run double to cause some consternation in the third. The Stars answered in the fourth as Waggoner ripped her drive to left, followed by McCauley’s RBI triple and Haley Deckard’s run-scoring single for a 7-2 lead.

Jewell’s two-out, two-run drive to center made it 9-2 in the sixth. Pike scored three more unearned runs in the seventh, courtesy of two more BNL miscues, before Jewell ended the threat.

Waggoner was masterful in the circle, allowing only three hits. Her control, and her ability to move pitches and change speeds, is critical.

“My curve ball is working well,” she said. “It keeps them off balance. It’s the movement, hitting the spots. That’s key.”

“We moved it around, threw in and threw out,” said Gilbert, who calls the pitches from the dugout. “Any time you can keep the hitter from getting comfortable, keep them off balance, your chances of getting them out increase a lot.

“She has control of her pitches – not all of them all the time, but she’s close. She’s getting more confidence. It makes it a lot of fun.”

Kern, Waggoner and Stones all had two hits off Pike hurler Chloe Williams.

“That was a good win,” Gilbert said. “We had some good at-bats. We’re starting to gel, starting to get production top to bottom. That will get us to the next level, if we can be nine hitters strong with tough outs. We’re getting there.”

Kavanaugh had three RBIs for the Chargers.

BNL will return to action on Saturday, hosting Silver Creek (10:15 a.m.) and Vincennes Lincoln (2 p.m.) as the new turf field is officially dedicated during pregame ceremonies.