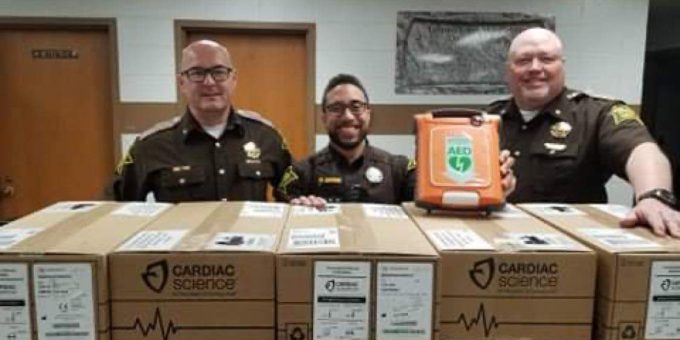 “The AED’s will be distributed to our deputies and be an added tool in the event deputies respond to a medical emergency where an AED is needed. Through training and hands-on practical exercises, all deputies maintain CPR and AED certification through the American Heart Association,” said Sheriff Branham.

An AED is a medical device that can analyze the heart’s rhythm and, if necessary, deliver an electrical shock, or defibrillation, to help the heart re-establish an effective rhythm.

All AED’s approved for use in the United States use an electronic voice prompt to guide users through each step.

Because a user of an AED may be hearing impaired, many AED’s now include visual prompts as well.

The AEDs were purchased from commissary funds and not taxpayer money.

The council approved Sheriff Mike Branham’s request to hire two corrections officers, one part-time and one full-time jail officer and a road deputy.

According to Sheriff Branham with the retirement and deputies finding other employment at other agencies the Lawrence County Sheriff’s Department has lost more than 75 years of experience in law enforcement.

Currently, three officers are in training and the department is using a large amount of overtime to cover the vacancies in the department. One detective has been assigned to patrol duties. Due to officers covering other shifts no one has been able to work in the drug task force.

Currently, there are 162 inmates in the jail. Of those 132 are males, 29 females, one Level 6 felons, seven Department of Correction holds, and one parole hold.