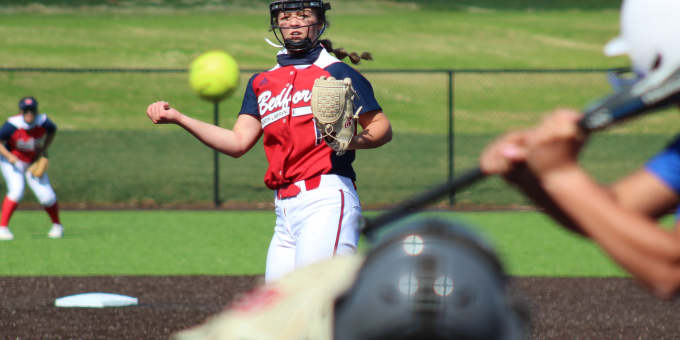 BEDFORD – Annie had her gun, and Bedford North Lawrence’s top-heavy offense had its power cannon roaring. A more perfect return to the field, on a brand new turf facility, could not have been scripted.

With Sarah Stone doing the most damage during a devastating long-ball attack, with Annie Waggoner twirling two gems in the circle, the Class 4A 19th-ranked Stars made their impressive 2021 debut with a pair of victories on Saturday afternoon.

Stone crushed two home runs as BNL overpowered Class A No.3 Loogootee 14-4 in six innings during the first game of a three-team, round-robin opening day. Waggoner fired another masterpiece in the finale as BNL blanked 4A No.26 Martinsville 8-0.

These girls definitely dig the long ball. BNL hammered six out of the park during the two games. Stone smashed three, Carlee Kern pounded two from her lead-off spot, and Waggoner added her first varsity homer. The school team record of 22, set in 2019, is already in serious jeopardy at this pace.

BNL did other things besides punish the fences. Waggoner gave up one run in five innings against the Lions, then went six strong innings in the nightcap. The Stars totaled 30 hits in the twinbill.

Not a bad way to get back in the swing of things.

“There was a lot of nerves, to come out and play as well as they did,” BNL coach Brad Gilbert said. “We made a few mistakes, but overall there were not a whole lot of negatives. We got two wins against two ranked teams.”

BNL flexed its offensive muscle against Loogootee, striking with three runs in the third as Kern singled, stole second and scored on a Waggoner single. Stone followed with her first blast, a drive to deep center for a 3-0 lead.

The top four in the BNL batting order (Kern, Waggoner, Stone and McCauley) had 14 of the 17 hits and 9 RBIs against the Lions. Waggoner fanned 14 and allowed only 5 hits.

“Annie was throwing her curve ball very well,” said Stone, getting a front-row view from her catcher’s spot. “It was moving a lot. And her change was awesome.”

Asia Crim had two doubles and Adie Nolley had 3 RBIs for Loogootee (0-2 after losing the second game to Martinsville by a 6-5 count).

BNL continued its power surge against the Artesians. Kern cracked a lead-off home run in the first. Stone added a two-run double down the left-field line in the third, and Blackwell executed a perfect squeeze bunt for another run.

Waggoner and Stone jacked back-to-back homers in the fourth for a 7-0 lead. Stone, in the ultimate sign of respect, was intentionally walked with the bases loaded – rather than give her a swing to end the contest by mercy rule – in the fifth. All that did was delay the inevitable.

Stone, a University of Kentucky recruit, was a combined 6 for 7 with 7 RBIs in the two games. She was among those making up for lost time after the 2020 campaign was cancelled because of the virus epidemic.

“Bombs are pretty nice,” Stone said. ”I did start hitting the ball square. It’s a blessing to be out here. It sucks that last year was taken from us. I think our team came out today and showed out. It was very needed.”

McCauley had three doubles against the Artesians and went 7 for 9 in the two games. Haley Deckard had three hits, including a blast off the top of the fence, against Martinsville.

“There are some kids, if we try to hit the ball on a line, great things are going to happen this season,” Gilbert said. “We want to try to crush it out, but when we square it up, we’re going to hit some doubles.”

Waggoner struck out 7 and scattered five hits in six innings. Martinsville had only two runners reach third base. Hayley Davis worked a perfect seventh in relief.

“Our pitching was pretty good,” Gilbert said. “You don’t have to have 10 pitches and overpower people. Just throw strikes. And our defense made plays.”

The best play was courtesy of Stone. In the top of the fourth, Martinsville’s Kenner Nunn lofted a foul ball near the backstop, next to the Martinsville dugout. Stone, dragging her catcher’s gear, gave chase, fell to her knees, then dove to make a spectacular catch.

“That was unbelievable,” Gilbert said. “People want to talk about her hitting, but that was a big-time play. She’s a softball athlete.”

BNL (2-0) will visit Southridge on Monday.