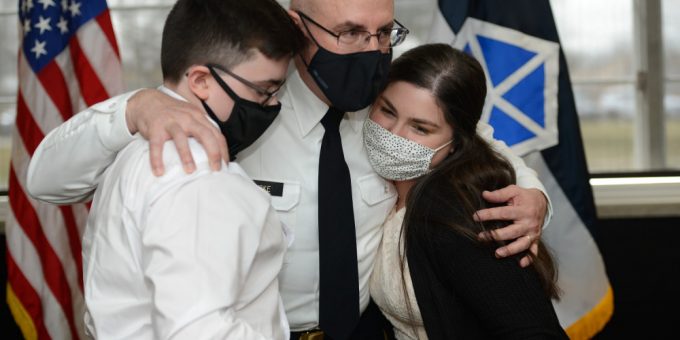 “This role that Bob is about to undertake, as V Corps deputy commanding general for support, couldn’t be awarded to a more worthy and accomplished individual,” said Lyles in his speech. “There isn’t another soldier in the National Guard, or perhaps anywhere, who has accrued his specific background and qualifications. Bob’s can-do attitude and his ability to employ a command philosophy of integrity, honesty, hard work and lifelong learning make him, in March Madness lingo, a slam dunk.”

On Order, V Corps, alongside allies and partners, competes forward in Europe to promote interoperability, counter malign influence and deter aggression. When directed, commands and controls Army, joint and combined forces in response to crises or, should conflict occur, fights and wins in large-scale combat operations.

Prior to serving overseas, Burke led the Indiana National Guard’s 76th Infantry Brigade Combat Team, headquartered in Lawrence, Indiana. During his tenure, the 76th was the first National Guard brigade to lead Pacific Pathways in 2018. The team’s soldiers also participated in high-profile exercises including eXportable Combat Training Capability program in 2016 and Joint Readiness Training Center at Fort Polk, Louisiana in 2017.

“There were two significant things for which I came to truly appreciate over my now 31 years as a citizen-solider, traditional Guardsman,” said Maj. Gen. Robert D. Burke, V Corps deputy commanding general – support “One is being able to not only do your second job as a soldier, but able to balance the dual career required by the military which on top of it has a military education requirement for every grade in order to be promoted.”

While a traditional Indiana National Guardsman, Burke also served as an Indiana State Police Officer, and several troopers made the trip south to support one of their own.

“The second and potentially one could argue the most important, is having a civilian employer that is completely committed to supporting their National Guard employee,” Burke said.

During his military career Burke has received the Bronze Star Medal, Meritorious Service Medal and Army Commendation Medal among many others. He’s served as the 38th Infantry Division’s operations officer and has commanded two battalion-sized formations.

Burke and his wife, Tina, have four children: Tyler, Kayli, Macy and Kyle.