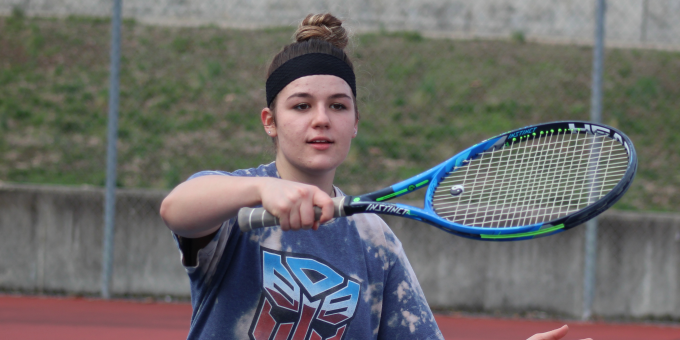 BEDFORD – Two years after its last varsity match, Bedford North Lawrence has finally returned to the courts. And there’s been a lot of lost time. Blame that, like so many things since COVID-19 arrived, on the virus blanket that smothered so much.

After losing the entire 2020 season, and most of the summer work as courts were vacant and closed, the Stars will unveil a brand new team for the new campaign. It’s a fresh start, with fresh faces.

“We have nobody coming back that has varsity experience,” BNL coach Joni Stigall said. “We have very few that have high school match experience. So it will be an interesting year.

“We were hit hard. Very hard. Even the places you could go play were shut down. So we’re starting from scratch. We do have some athletes, and they’re picking it up quickly. But not two weeks quickly. If we had played last year, we would be sitting in pretty good shape. But it is what it is.”

BNL had 20 athletes answer the call for the 2021 season. Among that group, Stigall hopes to find a top seven for the lineup. She’ll start with Rachel Kidd (who played two matches in 2019), Mallory Pride, Bella Stigall (the coach’s daughter) and Emily Duncan.

Several spots are up for grabs.

“We’re thinking about putting every thing we have in doubles, and praying for singles,” Stigall said with a laugh. “That’s about all we can do.

“Instead of worrying about winning matches, we’re worried about improving every single match. That’s our mindset, take one match at a time and improve on every court, if we can.”

The Stars will start the season on April 5 at Barr-Reeve, then face Martinsville in the home opener on April 6.