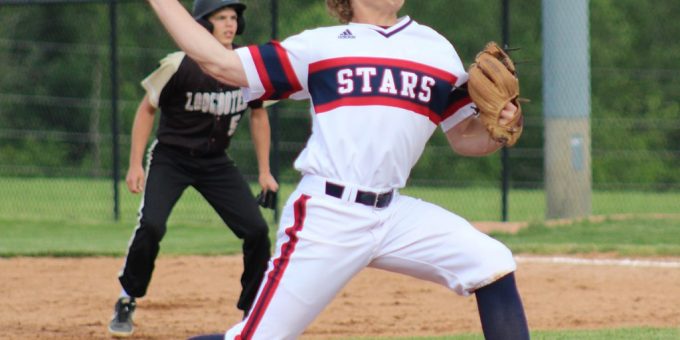 BEDFORD – Even the worst of opening days, and a bone-chilling 40 degrees with freezing wind and miserable rain qualifies for that, was a great day as Bedford North Lawrence baseball made its official return.

After a year’s absence, after six seniors were denied their 2020 farewell season when the virus swept across sports, the Stars started official practice sessions for the ‘21 campaign on Monday. Play ball!, indeed. Nothing, not even weather fit for the North Atlantic, could dampen this day.

With nine seniors leading the way, BNL got to work, starting the countdown for the opening game on April 1. No fooling this time. Last year, everyone held on to hope for a season that never came. Now, normality is returning.

“It’s a good feeling that we get to start the season,” BNL coach Jeff Callahan said as he began his eighth season at the helm. “I looked out the window and it’s 40 degrees and rain – and that’s OK.”

BNL has several reasons for excitement. The playing field now features a new turf infield, plus an outfield that has been leveled and sodded. The top-heavy senior class includes seven with varsity experience from 2019. And the dreaded term “shutdown” hasn’t been heard.

“Last year was very unfortunate,” Callahan said. “For the most part, summer baseball across the Midwest was typical. A lot of kids did get a summer season, but that’s different. You’re not playing with the friends you grew up with and for your school. They missed that year of developing friendships and developing as a team.

”With the leadership we have, the seniors have done a good job of working hard as a group, being leaders for the other classes. It’s been a good preseason. We’re ready to get started.”

BNL will feature some familiar faces, with senior catcher Evan Waggoner (a University of Evansville recruit) anchoring the lineup. As a sophomore, he hit .365 (leading the Stars with 38 hits and 24 bases on balls) with 1 home run and 19 RBIs. He also threw out 18 of 37 base runners attempting to steal and was named to the Hoosier Hills Conference squad.

Senior infielder Whitt Callahan hit .246 with 4 doubles and 10 RBIs as a sophomore, and senior Colton Brown will roam in center field. Most of the other spots are up for grabs.

Who will be on the mound? That’s the main question, the position with the biggest losses from 2019 and the fewest immediate answers. Senior Aden Pemberton, Konley Woodward, Brayton Brown and Cole Karr will be among the many likely to see action on the hill.

“We’re going to be pretty green, in terms of varsity experience, when we take the field,” Callahan said. “It will be a very competitive team, one that does the little things well, plays good defense, throws a lot of strikes, puts the ball in play.

“We won’t hit a lot of home runs, we’ll be very disciplined. We’ll have to win a lot of tight ballgames, and we have the grit to do that with his group.”

BNL will visit Evansville North for the season debut, then return for the home opener on April 2.