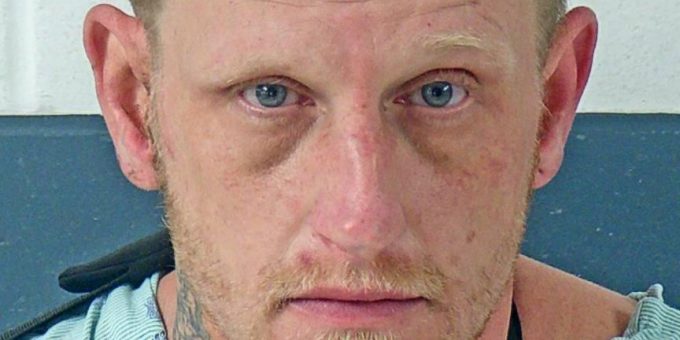 LAWERNCEPORT – A Mitchell man was arrested Saturday after a Lawrence County Sheriff’s Department deputy was requested to the 3350 block of Lawrenceport Road after a report of a burglary.

The caller reported someone had broken into his cabin and stole numerous items including a weedeater, leaf blower, electric hand tools, a mini fridge, food, bedding, blankets and towels.

Unsuccessfully, police attempted to get Porter to answer the door. While waiting on the requested search warrant, another neighbor reported missing items. The neighbor believed 39-year-old Joe Porter had stolen his personal property items. He stated he had seen some of his own clothing articles hanging outside Porter’s cabin.

Officers forcibly gained entry once the search warrant was obtained.

Once entry was made, police discovered the door had been bolted to the door and then nailed to the floor. Officers also discovered a rug covering an open hole in the floor to a stairwell that went to a lower level of the cabin.

Police ordered Porter to come out of his hiding spot. When doing so, Porter resisted, causing an officer to lose his balance and fall to the bottom of the stairwell. Porter escaped and ran down Lawrenceport Road. Ensuing in a foot pursuit, an officer was able to catch up with Porter but was unable to detain him. Porter eventually rolled down a steep embankment, entered the river, and disappeared under a river cabin.

Porter finally emerged at the water’s edge and threatened to jump in again, if officers were going to take him to jail.

An ambulance was called to the scene where Porter was treated for injuries he suffered from fleeing the police. He was then transported to IU Health Hospital by a police officer for further treatment.

The stolen property from both victims were recovered in Porter’s cabin and returned to the owners.

Police also found a small amount of marijuana and meth in the cabin.

Porter suffered an arm laceration that required stitches and a broken elbow.