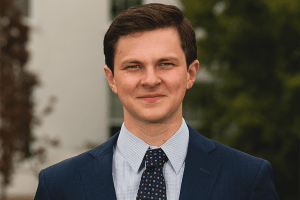 (BLOOMINGTON) – Indiana University alumnus John McHugh, a graduate of the Hamilton Lugar School of Global and International Studies, has been awarded a prestigious Marshall Scholarship to pursue graduate study in the United Kingdom.

McHugh, who will study at Oxford, is a research associate at Harvard Business School, where he studies Chinese business and political economy, including their intersection with U.S. trade, foreign policy and national security. Companies that he’s been particularly interested in are Huawei and TikTok, which have made a significant impact on worldwide trade and politics.

The Marshall Scholarship was created by the British government in 1953 to strengthen ties between the U.K. and the U.S.