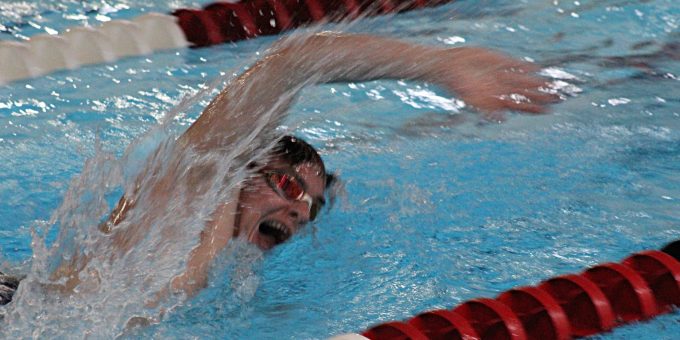 BEDFORD – Alexander was bored, as elementary-age boys are prone to be when big brother is involved in an activity and little brother is forced to watch. Instead of waiting for Andrew to finish his practice session, young Alexander dove in the water with him.

That was his Swenson family introduction to the sport of swimming. And Alexander is still making a surprising splash.

Swenson, after a stunning time drop and dominating sectional victory, will compete in the 200-yard individual medley as Bedford North Lawrence’s lone representative during the IHSAA state preliminary races at IUPUI on Friday night.

Swenson roared home in 1:59.82, the fourth fastest IM time in BNL history, to win the sectional race and qualify for the state finals. That sizzling time was almost a seven-second improvement from his seed time, and he won the race by nearly five seconds. In swimming terms, that’s a blowout.

“I surprised myself a bunch,” Swenson said. “I looked at the time board, and it was ‘Whoa, that’s crazy.’ I had a drive, just to win, get to the state meet. I thought to myself that I was definitely going to get it. I just pushed through the pain during the entire thing.”

Swenson, a junior, is making his third straight trip to the state finals. As a freshman and sophomore, he competed in the 500 freestyle and two relays. This event combines all four of the stroke disciplines, requiring more technical expertise.

“I’m pretty happy about being able to do something different,” he said. “I get to improve my other strokes. Every single year, it’s a humbling experience at state. It’s a very cool experience because you get to see everyone improve, everyone is really supportive. It’s very welcoming.”

Getting to this point was a victory in itself. Pools were closed all summer during the height of the virus pandemic, and BNL was forced into a shutdown during the season. During the crucial taper process prior to the sectional, the winter storm forced school cancellations and disrupted the practice schedule.

“It hurt a little, especially for the 500,” Swenson said. “Halfway through that race, I started losing more energy than I usually would have. The 200 was perfect. That’s the best I‘ve ever felt after a race. I felt like I could run a mile or something.”

Swenson is seeded 28th for the state meet. If the times from the sectionals across the state hold for the two prelim sessions, he will need another significant time drop to qualify for the second day of competition on Saturday. The top eight will swim in the state championship race, while places 9-16 will race in the state consolation.

“If a swimmer can be right around what was a lifetime best at sectional, they’re right where they need to be,” BNL coach Adam Young said. “It’s hard to keep dropping that much time. Something around what he did at sectional would be a great job. Anything else would be gravy. Knowing Alexander, it could be gravy time.

“I was amazed to see what he did at sectional. It would not surprise me to see him go 1:56 or something like that. If he has a drop, he could sneak into that top 16, which would be huge.”

With a full week of tapering, Swenson expects another time drop. He’s been honing the breaststroke portion, the weakest of the four sections, while perfecting the butterfly and solidifying that as his favorite of the four strokes.

“I really want to drop at least 2-3 seconds, I really think I can do it,” he said. “I’ve been working on breaststroke this week, working on breathing. I will swim as hard as I can and see where it takes me.”

Swenson will also rely on advice from his older brother, now a member of Purdue’s squad. Andrew finished 9th in the 100 backstroke in 2019.

“He’s helped me a bunch mentally,” Alexander said. “After practices, he will call and ask me how it went. I will show him videos and he has helped me improve my stroke. He has me calmed down.”

The difference this season? Swenson is focused on one event. There is no reason to conserve energy for multiple races.

“He can put it all out there,” Young said. “The adrenaline factor is there. In the sectional, he wasn’t really tested in the way he will be at state, where he will have swimmers right there side by side with him. That really helps to have someone to race.

“For our team’s last swim of the year, I’m not sure there’s anyone else to put that on their shoulders. You always have athletes you can put out there and they will go after it.”

Swenson will compete in the second session of prelims at 5:30 p.m.