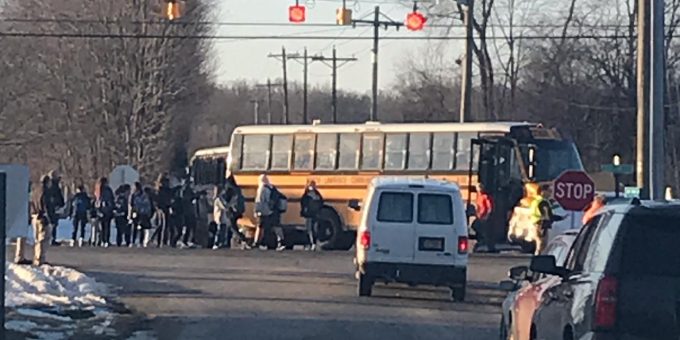 (BEDFORD) – No one was injured in a North Lawrence Community School bus accident Tuesday morning at US 50 East and Maple Leaf Road.

According to a Lawrence County Sheriff’s Department police report, 29 students were on the bus at the time of the accident at 7:57 a.m.

Police say the bus, at 2010 Thomas driven by 67-year-old Ricky Wessel, of Bedford, was stopped at the stop sign at Shawswick Station Road where he attempted to make a left turn to travel west on US 50.

At the same time, 32-year-old Emma Collingsworth, of Heltonville, had stopped her 2019 Kia Optima at the stop sign on Maple Leaf Road. She then attempted to travel south across US 50 East.

The bus struck Collingsworth’s car on the driver’s side.

Both lanes of US 50 were closed while police investigated the accident.

The students were transferred to a different bus and taken to school.

Assisting at the scene was an IU Health Hospital ambulance crew, the NLSC Transportation Department, and first responders with Shawswick Volunteer Fire Department.