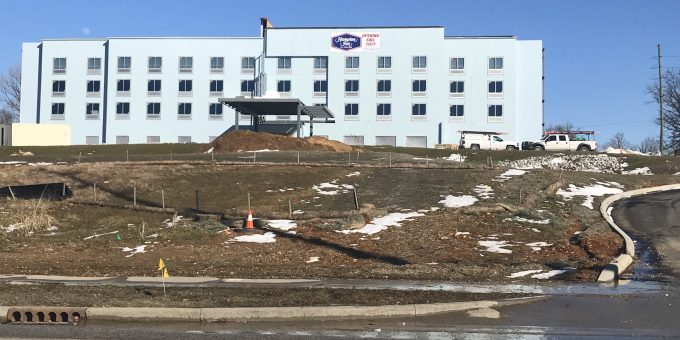 (BEDFORD) – The Bedford Board of Zoning Appeals denied a sign variance to Bedford Hotel Developers LLC. for the Hampton Inn located at 1322 Becky Skillman Way.

Zoning Board members Matt Parker, Steve Kimbley, and Doug Kellmans, voted no on the request, with members Bill McFadden and Angel Hawkins voting yes. The owners requested an additional 3 X 5 sign for the side elevation that would have faced 16th Street. Officials for the hotel said the sign would have given the hotel visibility since it has no highway or frontage on 16th Street.

Board member Angel Hawkins said that the hotel is a great asset to the community, and the sign would help it become more successful.

However, Board member Matt Parker stated there must be a compelling reason to override the ordinance as written, especially with the history of Bedford Zoning Appeals denying sign variances in past.

The Board voted to retain officers Matt Parker as Chair and Steve Kimbley as Vice-Chair with Brandon Woodward as Secretary. Other board members include Angel Hawkins, Bill McFadden, Doug Kellams, and Brenda Cummins ex-officio member.